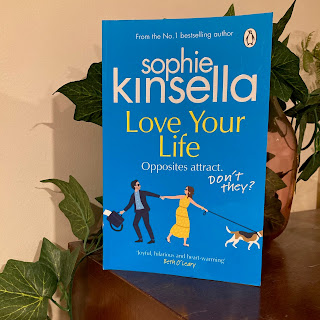 Opposites attract ... but can a relationship between two complete opposites actually work? That's the premise of Love Your Life, Sophie Kinsella's twentieth full length novel. (Twenty-fifth, if you count her children's books and novellas, and thirty-second if you also count the novels she wrote in the 1990s under her legal name, Madeline Wickham. Which, obviously, means that she's written rather a lot of books.) Ava and Matt meet at a writing retreat, one where the budding authors are not allowed to reveal their names, or anything about their personal lives. Knowing one another only as Aria and Dutch, the pair enjoy their time and shared experiences and soon fall in love. But from the moment they arrive back in England, the stark differences between the pair begin to emerge. Ava is scatty, was orphaned as an adolescent and is very affectionate toward her friends and her dog, a loving but undisciplined beagle named Harold who basically has her wrapped around his little paw. Meanwhile, Matt is from a wealthy family, has an important role in his family's multinational company and is disciplined in all things. How can their relationship possibly work?

Much of the novel centres around one, things going painfully-but-comically awry and Ava's complete inability to recognise and address that something is wrong. Then again, Matt's not that much better when it comes to addressing things.

And it doesn't help that parts of this novel feel poorly planned. In many respects, Ava seems just like another Sophie Kinsella character, Rebecca Bloomwood from the Shopaholic novels but without the spending addiction or obsession for expensive things. She's lovely and loyal, but scatty and her denial about absolutely everything should be endearing, but on more than one occasion it became annoying. I also found that her group of friends were a bit much, as was the first chapter, which focused on the group's theories about how to find the perfect relationship, rather than setting up the situation where Ava met Matt. But those grumbles aside, there are some truly funny moments in this book, and not one but two evil ex-girlfriends that made for perfect love-to-hate material. And Harold, who had all of the ingredients to be painful was quite endearing, especially at the end where we see just how much he truly does love Ava.

This may not be Sophie Kinsella's best book, but it has some fun moments.