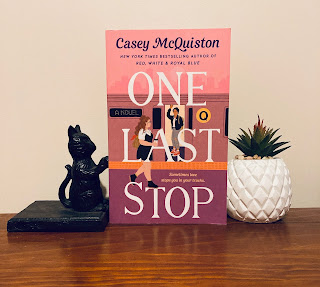 One Last Stop is a lighthearted romance with a difference. One of the characters is lost in time. When twenty-three year old August moves to New York City, she's not expecting much. She's never been very popular and she's pushing her way through college and college transfers for no other reason than she doesn't really know what else to do with her life. Then her new housemates turn out to be absolutely lovely, even if their shared apartment is a bit of a dump. And she finds work straight away, at a quirky pancake joint. And last, but definitely not least, she finds herself falling for the cute girl that she spots on the train. There's something mysterious about the quirky, old school punk Jane Su, but nothing could prepare August for the discovery that Jane is caught in a time loop and has been stuck riding on the same train line since the 1970s. Can August find a way to save her?

Although I loved the concept of this one and it had some very cute moments, I felt that the storytelling dragged and the novel felt far longer than it needed to be. August's situation made for a great escapist read--about a lonely girl who moves to the big city and finds her place in the world. And Jane's situation of being in a time loop was certainly intriguing and gave the book an extra boost. But as I said, it felt a bit too long. And a little bit too wholesome in places. (Note to authors: it's okay to give characters flaws that are just flat out annoying, instead of cute. It's what makes them relatable.) I think I would have enjoyed it more if it was a novella, or even if we got to know more about Jane, whose actual name is Biyu, earlier in the novel. Which brings me to another point. I would have loved to have known more about Biyu/Jane's life and the discrimination that she would have undoubtably faced on the grounds of her race and sexuality in the 1970s, and how she handled that.

While this one did not live up to my expectations, One Last Stop will probably be enjoyed by readers who want a quirky, escapist read with a slow burn romance.