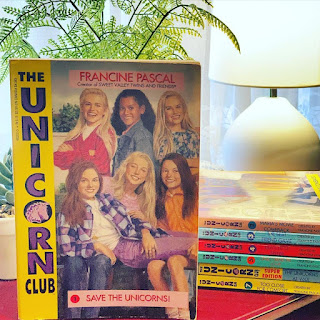 Then came the most surprising Sweet Valley spin-off of all. The Unicorn Club. Pitched at the same audience as Sweet Valley Twins, the books were released sporadically (it would sometimes be months between releases,) and told of the adventures of The Unicorn Club after the key characters started seventh grade. But the most surprising twist of all of this series was that it was the Unicorn Club itself who was the main star, rather than Jessica and Elizabeth Wakefield. In fact, Elizabeth plays such a small part in the novel that she doesn't even join the Unicorns (a club she scorned throughout the Sweet Valley Twins series,) until the end of the first novel.

The first book in the series, Save the Unicorns sets itself up as different from Sweet Valley Twins almost from the first page, when readers discover that unusually for a Sweet Valley book, this one is told in first person narrative. And the narrator (and main character,) isn't a Wakefield twin. Instead, that honour goes to Mandy Miller, one of the more likeable characters from Sweet Valley Twins whose claims to fame are that she loves funky, vintage clothes and that, by some kind of miracle, she managed to overcome cancer over the course of a single novel. Save the Unicorns portrays Mandy as a strong willed and friendly kid, who wants to bring out the best in her friends which isn't exactly easy considering that Jessica and Lila are in the middle of a dare war and Mary and Ellen seem content to just sit back and watch it all happen. Anyway, a few over-the-top antics lead to the girls being punished by having to do community service at a  local day care centre, which leads to a number of hijinks that involve the importance of friendship and also the group looking after some little kids ... which sounds oddly reminiscent of another, far more popular series of books aimed at pre-teen girls. Then again, this is Sweet Valley. Most of the adventures to be had are well, a little over the top. (For example, I find it a little difficult to believe that Lila was able to organise for people to have elephant rides at her party. Seriously? Elephant rides?)

Anyway, Save the Unicorns was enjoyable enough for me to read from start to finish. Although I can recall being very impressed by these books as a pre-teen, I remembered very little of the story at all. (In fact, the only scene I could remember at all was where Jessica and Lila stole the school principal's toupee.) There's more than one flaw in the narrative--how could someone as sneaky as Jessica just forget to dispose of the offending can of spray paint? Also why were a group of seventh graders given A Tale of Two Cities to read, a book that would be much better suited to students in the upper years of high school? That said, the book succeeds at what it tries to be, a fun and fluffy distraction for kids.

The novel ends with the Unicorns deciding to be a better club and taking on more social responsibility, along with two new and nerdy club members. But how long can the unicorns stay that way? Stay turned, I'll more than likely review more of these books down the track.