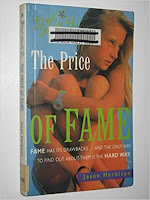 The 1980s and 1990s were a golden age for cheap paperbacks, especially for ones that were aimed at teen or preteen girls. Ask anyone who grew up during that era and they're almost sure to be able to name a favourite, whether it be The Baby-Sitters Club, Sweet Valley, The Saddle Club or Sweet Dreams. That said, there were so many different books published in the era, varying in themes, quality and authors that it is near impossible to remember them all. In this post, I've decided to shine a spotlight on a few titles from the era that may have been forgotten.
Bell Street School by Holly Tate
The ultimate 90s book series you've probably never heard of features the adventures of four friends--Becky, Liz, Charlie and Jas--who attend a secondary school in the United Kingdom. It lasted four volumes.
Bondi Place/Bondi Parade by Jason Herbison
After the success that TV scriptwriter Jason Herbison had co-authoring Living Famously with teen soap star Melissa Bell, he went on to writing a three book series about a bunch of Australian teens who find overnight fame staring in a TV soap. The three book series was initially published as Bondi Parade, but the series was later retitled Bondi Place when the books were re-released in 1998, along with a further three volumes in the series.
Three of a Kind by Marilyn Kaye
Three of a Kind was a six book series that told the story of three very different girls in their early teens who had one very important thing in common. They had grown up together in an orphanage. Volume One has them competing to be adopted by the same couple, who soon realise that they cannot choose one girl over the other two and adopt all three. Further books in the series chronicle the girls adjustment to their new life. The series was a minor success for the author who also wrote ...
Sisters by Marilyn Kaye
Intended as a four part series, Sisters was about four girls aged between 11 and 14 who all had strong but different personalities and in some respects felt like a modern day version of Little Women. Each book chronicled a life-changing experience for one of the sisters, and was named after the lead protagonist. A few years later the author wrote a fifth book, A Friend Like Phoebe, meaning that youngest sister Phoebe was the only character two have two books and, presumably, two life changing experiences.
Whitney Cousins by Jean Thompson
Cranberry Cousins by Christie Wells
Cousins by Colleen O'Shaughnessy McKenna
What do you write about when writing books about sisters becomes old hat? Cousins, of course! Each of these series featured girls who were cousins and their many adventures.
Live the Fantasy by Isla Fisher and Elspeth Reid
You've probably heard of this one. Sort of. In the 1990s, then teen-actor Isla Fisher co-authored two novels with her mother Elspeth Reid. But did you know these books were intended to be part of a series titled Live the Fantasy? There are mixed reports on how many books there were intended to be in the series, but it's safe to report that there were at least three, as a note from Isla at the back of the second book notes that she is hard at work on a third book titled Ebony and Amber. There's also evidence that their Australian publisher allocated an ISBN for another book titled Too Beautiful.
The Boyfriend Club by Janet Quinn Harkin
I discovered these when a pocket sized edition was given away with Girlfriend magazine. Anyway, the premise is pretty simple. It's about a group of four girls who form a club when they start high school with the goal of finding a boyfriend because, obviously, that's the most important part of their academic careers. A few years ago, I saw the original editions of these from the USA and I was surprised to see the stark contrast between the Australian edition and the American one. (See below.)

Random Trivia: At least some of the Boyfriend Club books were re-released as ebooks in 2016, which leads me to ...
City Hospital by Keith Miles
Aimed at the older end of the market, this series told the stories of five friends who were all medical trainees of one kind or another at City Hospital. Like The Boyfriend Club, this series has been republished as eBooks and is now pitched at a NA rather than a YA audience.
1990s Nostalgia