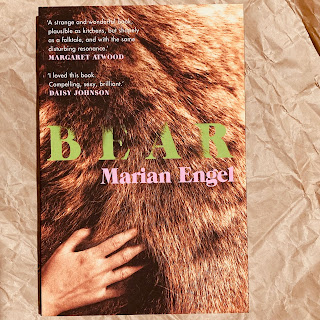 The mistake is all mine. I ordered this odd little book a few weeks ago, believing it to be satire. Because, surely, no one would write such a book and expect it to be taken complete seriously. Would they?

Bear is an odd read with a feminist bent about loneliness. It tells the story of Lou, a librarian at a history institute in Toronto. Her existence is a lonely one, working in a basement at a job that no one thanks her for until one day, she is picked to travel to the remote property that has been bequeathed to the Institute. And so, she packs her bags and travels to the remote island, where she is almost completely isolated. Her only companions are the man who runs the general store on the main land, and, well, a bear. The bear has been kept on the property as a pet and now its Lou's responsibility to care for it. As time goes on Lou's sense of loneliness becomes more and more apparent in the way she begins to interact with the bear.

I cannot say that I loved this one. I cannot say that I hated it either. I can honestly say that I found Lou's lusting after the bear and her behaviour to be quite depraved, but the author also skilfully makes it clear that Lou feels the same way. Her experiences are shown to be disappointing. After all, this isn't a lover who she is interacting with. It's a bear, who scratches, farts and is only interested in what it can take from her. Arguably, that may not be terribly different from some of the relationships that Lou has had with men, and maybe that's kind of the point.

Ultimately, Bear is an odd book. It takes the feminist ideal of the wild woman--the one who rejects men and living a civilised domestic life--and suggests that it may be equally filled with disappointment. It's not quite satire, just as the scenes where Lou attempts to, well get off with the bear, aren't quite erotica. Some of the passages are beautifully written, and it is this that is the novel's saving grace.

Originally published in Canada 1976 Bear became a classic in its own country, and had been published overseas and translated into a number of languages. Earlier this year, the novel was picked up by British publisher, Daunt Books who specialise in literary fiction. Surprisingly, this is the first time that the book has been published in England. I'm not sure whether it has previously been available in Australia or not--feel free to enlighten me in the comments.