Review: A Spy in the House of Love by Anais Nin 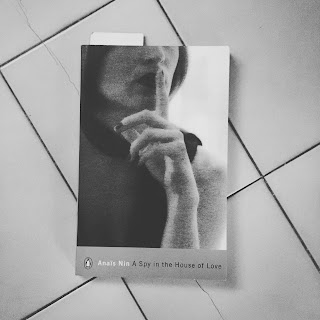 There is an artsy, ethereal quality to this short, modern classic about a woman and her quest to find sexual freedom in a number of extra marital affairs. Sabina is married to a wealthy and kind businessman who believes that she is an actress and who often funds her trips away, unaware that she is, in fact, indulging in a number of brief affairs with various lovers. And while she finds freedom, and love, Sabina also finds anxiety and judges herself harshly. In other words, it's a messy existence and she is free, though not necessarily happy.

A Spy in the House of Love is the fourth volume of Cities of the Interior, a continuous novel in five parts that was written and published by Anais Nin between 1946 and 1961. Daring for its era, like much of the work that Nin published in her lifetime (excluding her erotica,) the novel contains more than a hint of autobiography, reflecting small parts of the very shocking personal life of the author. (Nin was indeed married to a banker and indulged in a number of scandalous affairs, that were largely funded by her husband, most notably with fellow author, Henry Miller.)

Nin can certainly write and her prose shines on every page, regardless of how odd the subject matter may seem. Unlike the other volumes in Cities of the Interior, this one stands up well on its own, which may explain why, out of the five novels, it is the only one (to date) that has been published as a Penguin Modern Classic. As a study of female sexuality, it certainly has its place and is far more interesting and compelling to read than say, Fifty Shades of Grey, focusing on the rich inner life of Sabina as she fumbles her way through her many affairs and the love that she still feels for her husband.

A Spy in the House of Love Anais Nin