Review: The Gap of Time by Jeanette Winterson 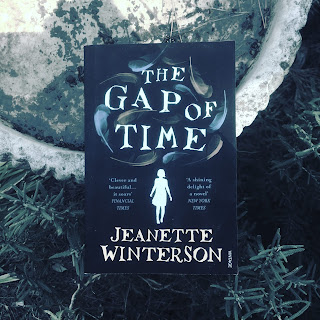 Over the past few years the Hograth Shakespeare project has produced a number of wonderful contemporary retellings of Shakespeare's work, including New Boy by Tracy Chevalier and Hag Seed by Margaret Atwood, both of which I have had the pleasure to read and review on this blog. Finally, I have turned my attention to the book that started the series, The Gap of Time by Jeanette Winterson which is a modern retelling of The Winter's Tale.

A baby girl was abandoned, after a strange and cruel turn of events led to her father believing that she was not his and plotting for her to be delivered to the man that he believes is the baby's real father. Before that can happen, however, the man charged with her 'abduction' and delivery finds himself being followed by a couple of gangsters. He hides the baby in a nearby baby hatch and tries to fend them off, resulting in one, his death and two, the baby being found by a musician with a big heart and his son, who decide to bring up the baby themselves. Years later, Perdita tracks down her father only to discover the huge mess that cold businessman Leo left behind after jumping to the wrong conclusion about his wife. And then everything ends at the moment of a big reunion, which not unlike the original.

On the whole, this was an entertaining modern interpretation of the original, with a number of characters that I loved to hate. The ending, which included a long comparison between this book and the work on which it was based as a part of the narrative instead of as an afterword felt unnecessary and a little annoying, as though the author was trying to offer the reader an apology that wasn't really necessary. The book tells the story that is promised on the back cover and it sticks to the original.

This is not necessarily the best book in the series, but it is entertaining enough.