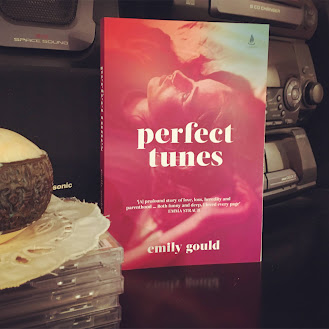 Lost dreams, motherhood and mental illness collide in Perfect Tunes. Twenty-two year old, aspiring musician Laura moves to New York with dreams of making it big as a musician. Under the watchful eye of her streetwise best friend Callie, Laura does her best to make her dreams happen, but she soon discovers that talent doesn't always equate to success. Complicating matters is her relationship with Dylan, the frontman for a big up and coming band. Their relationship is something that shouldn't be any more than a fling, but everything changes when Dylan passes away suddenly, and Laura discovers that she is pregnant. Fifteen years later, after Laura has built a successful career and a stable marriage, her daughter Marie begins to ask questions about her father, and Laura begins to wonder if she may still have a chance to make it as a singer/songwriter after all ...

This is an entertaining read about a woman whose life was drastically altered, and shaped, by a random event. At times it becomes difficult to feel any sympathy for the ever-naive Laura as she clings to Dylan, but it also feels very relatable--after all, in real life people often make poor choices based on misguided loyalty, and a lack of self confidence. The second half of the novel veers into Jodi Picoult territory, focusing on family life and hereditary illness, and the impact the decisions that Laura has made to keep Marie safe from her paternal grandmother. Interwoven is the grief that Laura feels for her lost dreams, and the fact that her best friend Callie has ended up with the career that she always wanted. Things come right in the end, in a way that is realistic and satisfying.

I enjoyed this one, in particular the prose was quite easy to get lost in. Some of the early chapters reminded me just a little of Daisy Jones and the Six. I also appreciated reading a story about a musician that wasn't an 'overnight success' story and the reminder that all artists have their struggles and that life can take an unexpected turn for anyone.