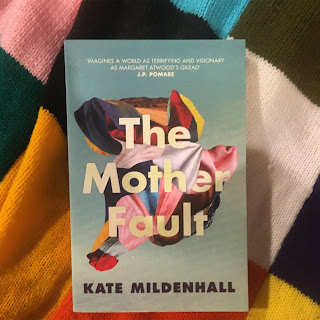 What would be the result if Margaret Atwood and George Orwell had written a novel together, set it in a not-too-distant future Australia and added a good old fashioned dash of adventure? Something similar to The Mother Fault, I suspect, a chilling new novel from Australian author Kate Mildenhall. Set just a few years from now, it tells the story of Mim, a mother of two in her mid-forties, whose life is turned upside down when she receives a call from The Department, informing her that her husband, a fly in, fly out worker is missing. Or to be more specific, Ben can no longer be tracked through the chip the government bestowed on its citizens. Suddenly, Mim is being questioned and forced to surrender her passport, amid threats that her children are going to be taken away to a BestLife--basically, a government controlled gated community.

Suddenly, Mim realises that she only has one choice. To remove her chip and for her and her children to find her husband.

As well as offering a chilling glimpse into a future Australia ravaged by Climate Change and an initially persuasive and, later, authoritarian regime, where this novel really shines is in its underlying message about the plight of refugees. The author flips the situation around, showing Mim leaving Australia by boat with her two children, literally fearing for her life and desperate to know the fate of her missing husband. But more than that, we see Mim as a human being, damning her husband for his choices and questioning her ability to adequately care for her two children at every turn.

For me, this was a page turner as I desperately wondered what had happened to Ben, and what would be the fates of Mim, Essie and Sam, and even Nick. I do not have children, and at times I was left wondering if, perhaps, the story would resonate just that little bit more with readers who do, and who would have undoubtably questioned their own ability and choices as a parent. I felt that the world building was a little sparse at times, though the author gave the reader just enough information to let them know what was going on. Ultimately, though, The Mother Fault offers an all-too plausible glimpse of a future Australia.

Thank you to Simon and Schuster Australia for my copy of The Mother Fault.

This book was read for the Aussie Author Challenge 2020.