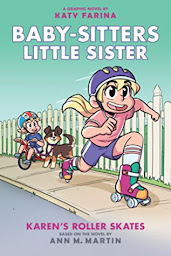 The second novel in Ann M Martin's best selling Baby-Sitter's Little Sister series gets the graphic novel treatment, and the results are spectacular. Katy Farina does a brilliant job of adapting and updating the subject matter, bringing it to life for contemporary readers.

Karen has become something of a daredevil on her roller skates. She knows she's good, but she wants to continue trying more tricks. And wow, she's just managed to jump over two coffee cans, her coolest trick yet. But then, just as she finishes her trick, she loses her balance and breaks her wrist. But the worst is yet to come. While at the hospital, she discovers that Ricky, her biggest enemy from school, has broken his leg. And he's got a famous baseball player to sign his cast. How will Karen ever be able to compete with him at school on Monday?

This was a cute story, suitable for kids who are at that in between stage of reading, where they're ready for something a bit longer than a picture book, but might not be ready to go it alone with a novel yet. As always, Karen balances on a fine line between being a cute and endearing kid, and an annoying show off who never really learns her lesson. I was also interested to see the first Graphix appearance of Shannon Kilbourne who, like a number of characters has been updated to more accurately reflect contemporary America instead of looking like a stereotypical rich kid. I'm keen to see if this will carry over to the BSC Graphix series, however I may be in for a long wait for that one as it appears that Kristy and the Snobs (the only early book to feature Shannon,) is not being adapted just yet, if at all. (The series will skip straight from Logan Likes Mary Anne! to Claudia and the New Girl.)

On the whole, this was a fun read with some very cute illustrations and just enough nostalgia to keep old fans interested.