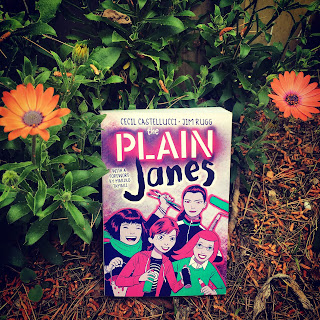 The power--and capacity--that art has to heal is given a thorough exploration in The Plain Janes, a brilliant graphic novel by Cecil Castellucci and Jim Rugg. Jane Beckle's life is thrown upside down when she is caught up in a terrorist attack in an inner city café. While waiting for help to arrive, she comes to the aid of a stranger, and later discovers that she still has his sketchbook--which has Art Saves written across the front. And, indeed, Jane fines that discovering art brings her a special kind of peace. Meanwhile, big changes are afoot--her parents move the family out of the city and into the suburbs, where Jane finds herself starting her Sophomore year at a new high school, a few weeks after the academic year begins. Sitting at the reject table in the Cafeteria, she forms an alliance with the other Janes who sit there, Brain Jayne, Theatre Jane and sports buff Polly Jane. Together, the girls come up with a plan to spread art through their otherwise banal neighbourhood. Calling themselves PLAIN (People Loving Art in Neighbourhoods,) they set up various forms of public artwork when no one is looking, and the public is encouraged to interact with them. But not everyone likes what they are doing ...

Originally published as three separate novels by DC in 2007, this one is a whopping 470 pages and, unusually for a graphic novel, it took me three days to read. Fortunately, it was worth every moment. This book has a lot to say about the capacity of art to transform lives. Jane's growth as a young woman who is a victim of a horrible act to someone who is willing to take the ultimate stand to fight for what she believes in, is pleasing to watch. Of course, there are plenty of setbacks along the way--disapproving adults, a not-relationship with the boy she likes, post traumatic stress, and a new and very talented art student at the school who just doesn't understand what Jane is trying to do--which is further compounded by the fact that some of her constructive criticism is spot on.

This is an enjoyable read. And though it is set in high school and there is a focus on all of the usual adolescent concerns, this will appeal to anyone who believes in the power of art, particularly public art, to transform neighbourhoods and even lives.