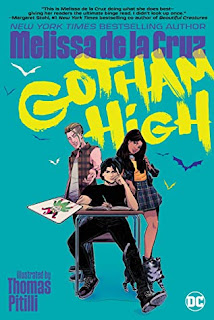 I found a copy of Gotham High in the Pop Culture section of my local bookshop recently, and I was so intrigued by the concept that I just had to bring it home. It seemed like a bold undertaking, a graphic novel, set in Gotham City, with a teenage Selina Kyle as a narrator and written by bestselling novelist Melissa de la Cruz who may best remembered for Blue Bloods a series of YA paranormal romances. (Full disclosure: Melissa de la Cruz has actually had books published in a number of genres and for a wide range of age groups.) Add to that the whole thing is illustrated by Thomas Pitilli, who has also worked on Riverdale and the fact that DC Comics have a tendency to give their writers and artists a lot of creative licence and the result is ...

In this one, we meet a teenage Bruce Wayne, who has just been expelled from a boarding school in Hong Kong. He returns to Gotham City and his guardian, his Uncle Alfred. (His mother's brother--see what I mean about DC Comics allowing a lot of creative licence?) Anyway, living next door to Stately Wayne Manor (yeah, okay they didn't call it that in the book,) is Selina Kyle, our narrator who is suffering some family troubles of her own. Her dad has Alzheimer's and what money the family had is slowly become depleted. Selina has a trust fund left to her by her mother's family, but she is not allowed to touch that money until she is twenty-one, thus preventing her from spending it on her father's care. She gets by as best she can, organising a gambling ring where they rip off naive rich kids with her on/off boyfriend from Gotham High, Jack Napier. When her childhood friend Bruce Wayne returns, she develops a crush on him, creating a love triangle. However, that triangle fades into the background when Selina comes up with a very cunning plan to get the money she needs for her father's care ...

This was a fun reinvention. The whole thing doesn't feel as much like an origin story as it does a possible prequel to an origin story. Here we see a number of classic superheroes and villains, ie Batman, Catwoman, the Joker, Batgirl and Poison Ivy, living their adolescent lives with no knowledge of who they will become. There's a lot of diversity in here, which was pleasing at first, but parts of it seemed as though it was included for the sake of diversity rather than adding anything useful to the story. (For example, why mention Alfred's husband, whose name I've already forgotten, when he did nothing to help push the story along? All he really did was stand in a door and look snobbish while Alfred dealt with the police.)

Obviously the whole thing is targeted to a predominantly teenage audience, and the author and choice of Selina Kyle as narrator means that this one will be of particular interest to female readers. It is the kind of thing that I wish had of been around when I was in my teens, a time when superhero comics were either pitched to kids, or to teenage and adult males, and my comic collection was mostly made up of secondhand Supergirl comics that I bought for fifty cents each from my uncle's comic stand. (And this was in spite of the fact that at the time, Lois and Clark was a top rating TV series, and Smallville would come along a few years later. Oh, and there were plenty of Batman movies floating about.)

Overall, Gotham High is a lot of fun and is completely accessible to readers who may not be familiar with Batman or DC Comics.