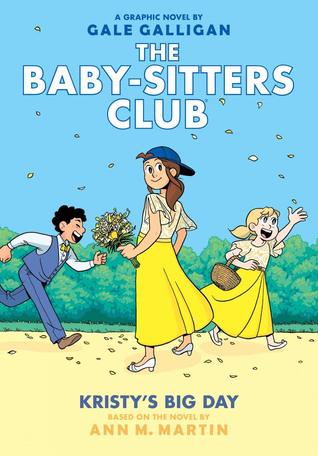 Who would have thought that back in 2006 when the first novel of the Baby-Sitters Club series was re-imagined as a graphic novel that it would prove so successful that BSC Graphix has become an entire series and the publisher is now up to book number six.

As devotees of the series know, this is the book where things started to change for the members of the club. With the original, it's probably the point where author Ann M Martin and her publisher, Scholastic, realised that they had a hit on their hands, and the potential to create a much longer series, with the stories alternating between the characters. And what better character to return to than Kristy, who had started the club, and unlike the others whose problems had largely been resolved, had a number of life changes ahead of her, with her mother about to remarry Watson Brewer, her millionaire boss. In the original series, it's a great turning point.

As far as the graphic novel goes, it works on one level, and not on another.

Like the original series, I doubt that the publishers dared consider that it would be so resoundingly successful. And while the duel story-lines of baby-sitting and Kristy's feelings about the wedding and the life changes ahead work well in the original, both feel a little rushed in the graphic novel. But then again, it's important to remember that these books are aimed at a pre-teen audience, rather than people like me who read them for nostalgic purposes. And as far as telling that story to a whole new audience, it's great.

(As for me, I'm pissed off that they've managed to write Mallory into the series, but Jessi hasn't also been included. Then again, I suppose that there is always potential for the writers to do that later, quite possibly with a two parter that somehow incorporates themes from Goodbye Stacey, Goodbye and Jessi's Secret Language.)

As was the case with Dawn and the Impossible Three, Gale Galligan does a wonderful job of bringing the beloved characters to life.

One to recommend to young BSC fans.

Postscript: In the days between writing this review and it's publication, a seventh novel for the BSC Graphix series was announced and will be published in September 2019--Boy Crazy Stacey. This leaves the potential for any of these titles to follow: Dawn and the Haunted House, Logan Likes Mary Anne, Claudia and the New Girl or Kristy and the Snobs.
BSC Graphix Gale Galligan Kristy's Big Day