Review: Captain Doobie Goodtime Slim and the One Thing They Had to Do Today by DC White 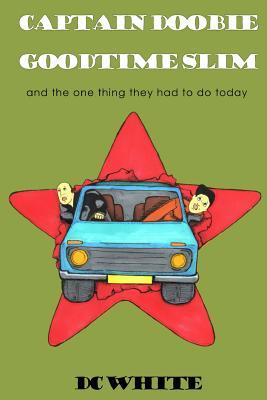 It's not every day that I get to review a book written by my own brother on this blog, though, admittedly, it probably won't be the last time I do this, seeing as one, I have more than one brother and two, the one who had this one published probably has another one in the works. So, forgive me if this review is a little biased.

Captain Doobie is a long-term unemployed twenty-something who has big dreams and ambitions, but can never quite be bothered getting off his bum to do anything about them. Along with his best mate, Goodtime Slim, they share a house in the outer southern suburbs of Adelaide. Things are all going well, until one day, Goodtime Slim finds them some cash-in-hand work driving a suped up Lada that belongs to a very well, unusual man, from Adelaide to Melbourne. Along the way, they fall foul of nearly everyone they pass, from the Milk Police (who are not impressed that they've been stealing crates from Chakraborty's Deli,) to the Centrelink employee who goes to extreme lengths to find out why Captain Doobie didn't keep his appointment, and the Russian Mafia. Oh, and there's a woman who thinks she's a pirate thrown into the mix as well.

This was a very funny novel that will no doubt resonate well with male readers who are looking for a novel that values fun over being offensive. Readers from Adelaide and South Australia will appreciate a number of in-jokes that are inserted throughout the novel.