January 05, 2019
Hi all, a fabulous treat on the blog for you today, an interview with the brilliant, award winning author Amber Lee Dodd, whose novel Lightning Chase Me Home was released this week. 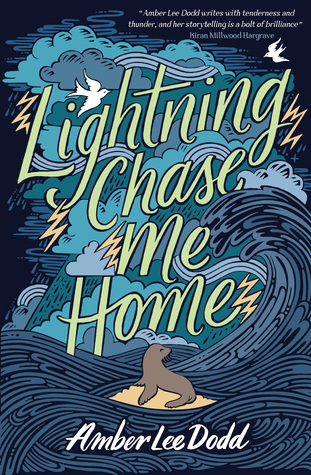 Hi Amber, thank you so much for stopping by Kathryn’s Inbox. Congratulations on the publication of Lightning Chase Me Home. In your own words, can you tell us a little about the novel and your journey toward publication?

I started writing Lightning Chase Me Home just before We Are Giants my debut came out. But it grew from a small idea bout a girl searching for her mum who was named after two great explorers, to something much more magical after a trip to Scotland.
I was lucky enough to get to stay in a Scottish castle just outside Edinburgh for a writer in residence post. There I fell in love with the landscape and myth and magic of the place and Lightning became something bigger and much wilder.
Lightning Chase Me Home Is a story about wild Scottish magic, old myths and great lost women explorers. But at its heart it’s a very contemporary book about a girl finding courage, her words and where and who she really belongs with.

Dyslexia is an important theme within the novel. What is something that you wish more readers (and the general public,) understood about children with dyslexia?
I think the interesting thing is one person's dyslexia isn’t another’s. It can present in different ways. Some dyslexics are fantastic mathematicians but struggle terribly with English. Other’s it’s the reverse. Dyslexia isn’t a simple set of symptoms; it’s a way to describe a different way of processing information. But it can be a complicated thing to understand and sometimes even more complicated to diagnose.
But dyslexia isn’t a bad thing. It’s just a different way of thinking. It can make some things tricky but it is also marvellous at allowing you to come up with original ideas, to think on your feet and to be creative.

Amelia is named after two of her mother’s favourite female explorers. Who are some of your favourite female explorers and do you think that they have inspired your writing in any way?
I think all of the explorers in the book are close to my heart. It was one of the reasons I wanted to celebrate them in the book. I think however my favourite is Alexandra David-Neel who travelled to the forbidden city of Lhasa, Tibet. She renewed her passport when she turned 100 planning on going on even more adventures! That sense of fearless, boundless adventure is something I wonder at.

What is one book that every child should read?
The one that calls to them! I loved Jaqueline Wilson, Roald Dahl and Jill Murphy growing up. But I like to think there are books coming out right now that will be children’s favourites.

Thank you again for stopping by. Before you go, is there anything that you would like to say to your readers in Adelaide, Australia?
I’m thinking of coming to Australia, so if you have a fabulous recommendation of a place to stay and see let me know!

I totally recommend stopping by Adelaide and sampling a frog cake. A visit to Imprints Booksellers is great too ~ Kathryn.
If you're interested in learning more about Amber and Lightning Chase Me Home, then be sure to stop by all of the other great blogs on this blog tour. 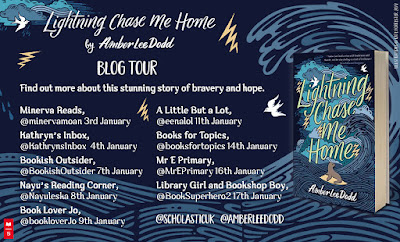