January 12, 2019
Pow! Bam! Welcome to Go Graphic a new semi-regular feature on the blog. In these posts, I'll be talking all things related to some of our favourite comics and graphic novels. Kicking off this week is a review of Hot in the City ... 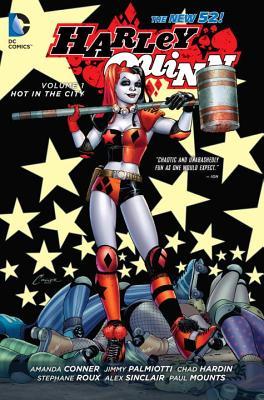 When DC came up with the New 52 back in 2011, their masterstroke was to re-invent Harley Quinn, the unhinged girlfriend of the joker, taking her out of Gotham City and placing her in Coney Island. After a former patient leaves her his apartment block in his will, Harley gathers up all her worldly goods on the back of her motorcycle and travels to Coney Island where she begins making new friends and establishes a new career on the local Roller Derby scene. But trouble awaits when she discovers that someone has taken a hit out on her ... and it might just take her friend and occasional lover (it's complicated) Poison Ivy to help her sort it all out.

Hot in the City is a graphic novel which contains several early issues of the New 52 Harley Quinn.

As I said, the re-invention of Harley Quinn was a masterstroke on part of DC. I quite like the new 52 variant of Harley, perhaps even more so than the rebirth version. (Sorry, but we all have our favourites.) As a character, Harley works better as an anti-hero than a villain. Plus no one deserves a date with the Joker, let alone a relationship. Of course, a big part of the magic of the character is that she gets away with saying, and doing, plenty of things that a lot of people would secretly like to do, even though they would never actually do them or contemplate it with any degree of seriousness.

In other words, the insanity works well within the pages of a comic book and its bloody entertaining. I thoroughly enjoyed this one, perhaps even more than I expected to.

I also really enjoyed the opening pages to this, where Harley interacts with the writers and artists of the series.