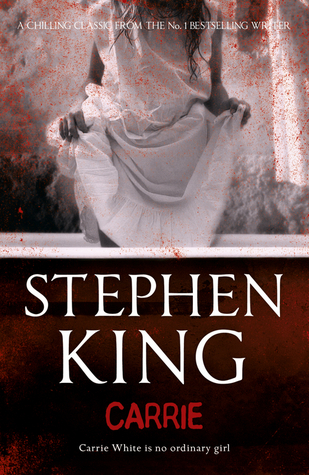 What a joy--and a revelation--it was to re-read Carrie twenty years after I first picked it up as a slightly angry teenager. There's a reason why Stephen King is so well respected as a writer and his talent is obvious, despite this being his a novel and relatively short.

Told from two perspectives--from books and articles written after the big event, and also in short blocks that form the story of what led up to the big event, we know that Carrie White, an unpopular high school student with supernatural powers destroyed not just the school, but an entire town on prom night. From there, King delves deeper and deeper, not only tells us what happened, but the crucial factor, the why. And it's entertaining stuff. It's difficult not to feel sympathy for Carrie, the misfit who has endured years of ostracism from her peers and suffered all kinds of abuse at home from her mother a supposed Christian fundamentalist. We also discover the bit players who made this tragedy occur. There is Sue Snell--a young woman so desperate to atone for her treatment of Carrie in the locker that her desperation borders on obsession, and she'll pay a heavy price, becoming one of the few survivors. Next comes Tommy Ross, the boy who gets caught up in Sue's plan, but finds himself a sacrificial lamb in more ways that one. Finally, there is Chris Hargensen, a spoiled and sadistic young woman, out for revenge, but who has no idea just how bloody her revenge will truly be. And somehow, the added element of telekenesis weaves itself into the plot perfectly, and believably.

It's been a long time since I read anything by Stephen King, and re-reading Carrie gave me a new appreciation for his skill as a writer. This is an author who knows how to write a ripping, page-turning read, even while letting readers know early on how the story ends.

Note: I previously read and reviewed Carrie for this blog in 2013. As the review was short and went off on an odd tangent, I have opted to archive it. No deception is intended. I have also read Carrie more than three times.
Carrie Stephen King