Review: Donald and Mickey: Quest For the Faceplant by Disney Comics 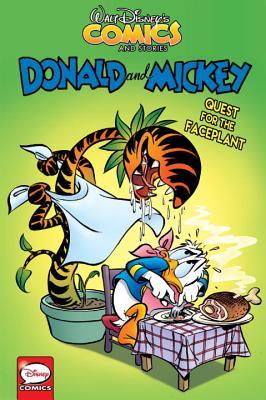 This delightful Disney graphic novel is a compilation of some previous Walt Disney Comics and Stories issues, and stars a my favourite Disney characters--the titular Donald and Mickey, along with Uncle Scrooge, Goofy, Daisy and many other who I haven't seen in a Disney comic for years like Clarabelle Cow. Along the way there are many adventures to be had, such as Donald's trip to Africa in a quest for a rare plant, Mickey inadvertently getting caught up in an adventure while he and Goofy paint Minnie's fence, and Donald's nephews Huey, Dewey and Louie have fun aboard a riverboat with Garvey Gull, an adventure loving orphan.

Most of the comics and stories were originally penned in Europe, where the Disney characters remain steadfastly popular, and have been translated into English. Consequently, (as is often the case with translations,) there are moments where the humour doesn't work quite as well as it should--the comic where Donald and Daisy are actors on a TV soap falls a bit flat. However, it was great to meet some new (to me) Disney writers and artists, the people who are continuing the fine legacy of Disney comic book artists Carl Barks and Floyd Gottfredson.