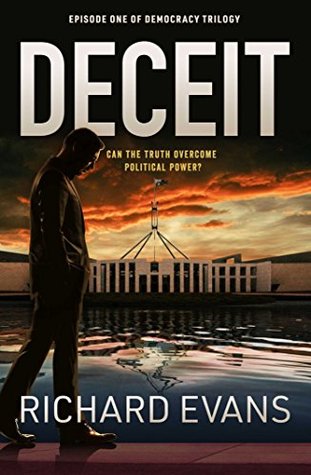 Former federal politician Richard Evans offers readers a thrilling, twisty ride in his debut novel Deceit. Set in Canberra, it tells the story of Gordon O'Brien, a soon to be retired clerk of parliament who, along with investigative journalist Anita Devin uncovers a scandal that could shake the nation to its core.

Prime Minister Andrew Gerrard has a dodgy deal taking place with the President of Indonesia to fund an offshore immigration detention centre. The legislation should have passed quickly, and without suspicion, but Parliament is thrown into chaos when eight MPs are killed in a plane crash. As Gerrard tries to rush the legislation through, Gordon and Anita are busy uncovering the scandal and finding ways to foil the Prime Minister before he can get the bill through.

The author has inside knowledge of the workings of Parliament and it shows, as does his talent for being able to work it into a story that is at entertaining and larger than life, while still being utterly believable. The plane crash is an interesting scenario in itself and had me pondering how it would play out if such a tragedy occurred in real life.

Gordon and Anita make for sympathetic characters who only want to do the right thing by the Australian people, while Gerrard's come uppence is pretty sweet. The novel is the first part of a trilogy, so I'm keen to see what will happen once Gerrard starts his quest for revenge.