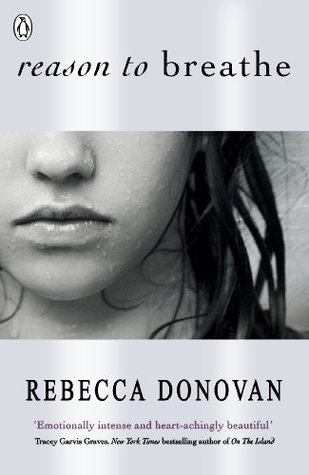 Reason to Breathe is one of those books that is very much a product of its time. Originally self-published shortly after the release of Fifty Shades of Grey the novel and its sequels enjoyed such success that they were eventually picked up by Penguin Books and distributed to an even wider, and overwhelmingly enthusiastic audience, ones who were hungry for an emotionally charged romance.

Other than that, this novel is completely unremarkable.

Emma lives in a small town, the unwanted ward of her Aunt and Uncle. Her Aunt is abusive to the point where she is clearly psychotic, punishing Emma violently for imagined slights and keeping unfair rules. Emma's only solace is her best friend Sara and school, where she keeps up a high grade average and is on a number of teams and committees. She pushes the other kids away at school as she doesn't want them to know about her family situation. However, that all begins to unravel when Evan a new student, takes an interest in finding out more about Emma. Emma finds herself attracted to Evan but if he discovers the truth about her family situation, she could be in serious danger ...

This one is an emotionally charged page turner, fitting for readers looking for a romance with a fairly unlikely setting and with a heroine who is determined to fight against the odds. It suffers a little from cliched characters and, in many respects, the abuse Emma suffers seems like a dressing to complicate her relationship with Evan, rather than an examination of a serious issue. Emma's reasons for not reporting Carol are sketchy at best, which may set a poor example for younger or impressionable readers. Still, Emma's history which is given to readers in dribs and drabs makes for interesting reading. The novel ends on a heck of cliffhanger.