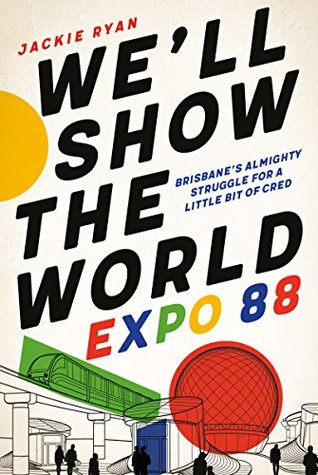 This is another review that I am going to have to start off with a confession. When I was a kid, I was absolutely fascinated by Expo 88. I remember learning about it at school, this huge exhibition that was taking place in Brisbane with all kinds of things--computers, new technology, rides and--gasp--a monorail. (I've always been secretly impressed by monorails.) Actually I was pretty impressed by the idea of Queensland, a place where the sun shone all the time, bananas grew and purportedly, there was a grasshopper on the loose up there who was drinking pineapple juice. I desperately wanted to go to Expo 88.

My parents, on the other hand, felt quite different.

Not only would taking a family of five up from Adelaide to Brisbane be expensive and time consuming, to them, but the Queensland they knew was something different. Queensland wasn't just a bit sunny, it was stinking hot. It was a political backwater. The police there were corrupt. You could get bananas here, from any fruit stall or supermarket. As for the grasshopper, well, he wasn't real. Why would anyone want to travel all the way up there for a bloody expo?

In many respects, my views and my parents views reflected the great changes that were happening in Queensland at that time. Expo 88 had a huge role in turning Brisbane into the modern, vibrant and much loved city that we know today.

We'll Show the World isn't just a book about the expo. It is a book about the events that led up to it, the political climate of the time, including the scandal that shocked the entire nation and led to the Fitzgerald Inquiry, and the massively successful outcomes of Expo 88 and the positive impact that it had on the ordinary people of Brisbane. It was proof that, despite the odds, despite the indifference of the other states, these people, this part of Australia could do something that was different and life changing.

For me, reading this book is as close as I'll ever get to the Expo that I so desperately wanted to visit. It was an enjoyable read, discovering the rich history that led to the event and how it was received by the locals.