Review: Junkyard Jack and the Horse That Talked by Adrian Edmonson 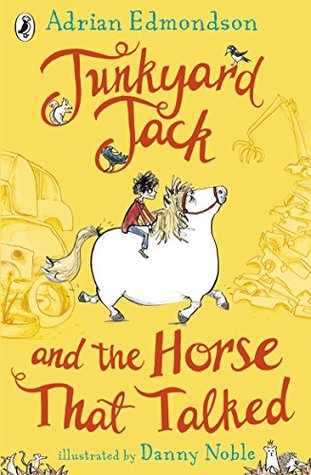 Dear readers, I think we may have another Roald Dahl on our hands. British comic genius Aidran Edmonson released his second novel for children earlier this year and let me assure you, it's a beauty. Jack is a short (comically so,) kid who has been a bit neglected ever since his mum got sent to prison for a crime that he knows she didn't commit and he was sent to live with his spineless aunt, his rotten to the core uncle and his nasty teenage cousin Kelly. His one salvation is the junkyard next door and the kindly man who runs it, but when Mr Mudge has a serious accident that all changes. Soon Jack finds himself on an incredible adventure along with Mr Mudge's shetland pony and some delightful talking animals who might just be able to help him out of this horrible situation.

There are lots of laughs to be had in this delightfully over the top tale that probably would have had me cheering and throwing my hat in the air--had I been wearing a hat. Things all come right for Jack in the most unexpected of ways and I couldn't help but find myself cheering for the kid. (And it was made even better by the discovery of what happened to his uncle.) This one is an enjoyable read, sure to entertain kids of all ages.