Review: A Place to Remember by Jenn J McLeod 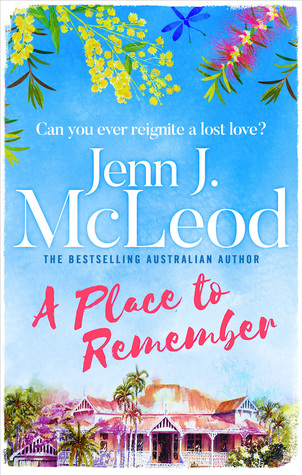 Much loved Australian author Jenn J McLeod's latest novel is a bittersweet tale of a missed opportunity, memory and redemption. Twenty-seven year old Ava has run away from the city and an abusive relationship to work as the cook at a country B&B. She never expects that the twenty year old son of the owners would be such a fantastic flirt--or so mature for her age. Despite her hesitations, she and John begin a secret romance, one that will attract the ire of both John's parents and Katie, the scheming but perhaps not terribly mature girl next door who wants John for herself.

Years later, Ava's daughter Nina learns the sad story of her mother's lost love--who is now an eccentric artist who after a tragic accident lost all his memories of Ava, and who was cruelly betrayed by two of the women who supposedly loved him--Katie and his own mother. As Nina begins to discover more about Ava and John she also finds the last thing that she expected, a romance of her own.

This was an entertaining read, and one that would appeal to women of a wide variety of ages and backgrounds. As always McLeod's talent lies in offering a real sense of closure--and redemption--for her readers. For example, while many novelists would have portrayed a character like Katie as simply bad or scheming, under McLeod's hand, we see a more complex and rounded character, who had her own tragic reasons for her behaviour, which were coupled with a bit of stubbornness and a whole lot of immaturity. (Still, I certainly had a giggle about what happened to the character in the end. A perfect fit, I think.) The tragedy of John and Ava's romance and what could have been made me sad, but there is also a sense that both had fulfilling lives in other ways, Ava as a chef and John as a painter.

As I said, I think this one will appeal to women of a wide variety of ages and backgrounds. Recommended.