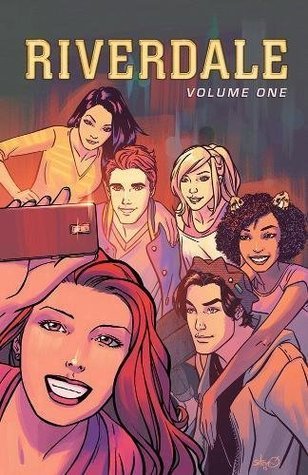 As comic and TV fans will no doubt be aware, the quirky and dark teen drama series Riverdale is a re-imagining of the Archie Comics, with Archie, Jughead, Betty and Veronica facing new challenges after one of their classmates drowned. And now the TV series has made its own transition into comic book form. It's like an Archie comic, only darker and characters who look more like the actors from the show than their original comic book counterparts. This series of comics tells shorter stories of what happened in between episodes of the television series. I have only seen bits and pieces of the television series, so it was interesting to come into all of this with my memories of comic book Archie still at the forefront of my mind.

I was expecting something quite dark, and Riverdale provided me with just that. While you might be able to share an Archie comic with a twelve-year-old (because who loves reading about high school kids more than twelve year olds,) this is definitely for older teens and adults. On a personal level, the biggest surprise of the comic was how much it made me love Veronica and Jughead--I've always been a little biased toward Archie and Betty--so I think I was more willing to accept the other two characters in their re-imaged form, while I silently cursed the others. There is also a significant amount of bonus material in the back, explaining the history of the comic and how the characters have evolved over the years. There's also a new Archie reboot comic included, which highlights the differences between Archie and Riverdale.

PS Just for fun, I bought a Betty and Veronica digest that I found at my local newsagent today. If I enjoy it enough, I may feature it in an upcoming blog post.
Archie Riverdale