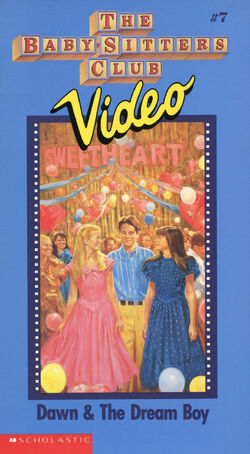 I suspect that I've never seen this particular episode of the BSC TV series before, as I could not remember a thing about it, whereas with some of the others, I could remember a thing or two, whether it be a pie in the face of a mean girl, or a slogan that was yelled out several times during the episode (count on Court.) Or maybe this episode is just less memorable for me, because it moves away from the core themes of the series, babysitting and responsibility, and moves a little closer to romance, a theme that was often included but was never a core part of the BSC books.

Anyway, in this episode, Dawn becomes a bit infatuated with Jamie Anderson, a boy from their grade who plays on the school soccer team. Only trouble is, she has never even spoken to him. Never mind. It turns out that he and Mary Anne have English together.  In a further stroke of luck, Mary Anne has been tasked with collecting Jackie Rodowski from soccer lessons which are being taught by none other than Jamie Anderson. She puts in a good word for Dawn, introduces the pair and then ... a mix up when Jamie phones Dawn and Mary Anne's house. Believing that he is talking to Mary Anne, Jamie asks Dawn out, who promptly says yes. The day of the big date (well, actually, they're going to an afternoon soccer match,) arrives, Jamie knocks on the door expecting Mary Anne, and of course Dawn comes out. The mix up is soon released, leaving Jamie a little red faced, Mary Anne uncomfortable and Dawn downright furious. The stepsisters fight, leaving the other Babysitters to try and patch things up before the pair ruin the upcoming Sweethearts dance. Anyway, after the pair nearly ruin the decorations, a truce is called and Jamie proves to be quite the gentleman at the dance, treating Dawn with kindness and he asks her to dance ...

This one was a lighter and fluffier episode, though it did leave me scratching my head a bit as to why anyone would organise a sweethearts dance for a bunch of kids aged between 11 and 13. It's certainly a world away from the Flintstones themed school disco that I went to at age twelve at my primary school. I was also surprised, but touched, that Jamie treated Dawn nicely--again it's a world away from any of the popular, sporty boys I knew at that age.

But then again, maybe that kind of thing is interesting to the target audience.
BSC TV Seres