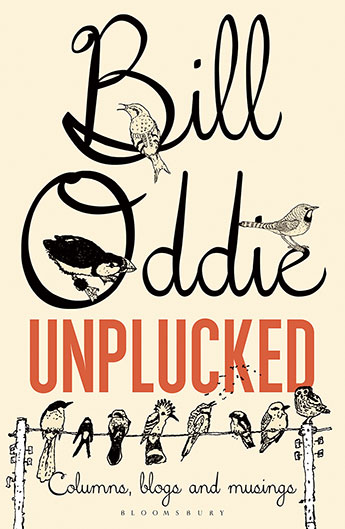 In Australia, Bill Oddie is best known as a comedian, actor and songwriter who found fame through the hilarious BBC television series The Goodies (a series that was repeated many, many times in Australia, but was never repeated on television in the UK until a few years ago.) In the UK, however, Bill Oddie is deservedly well known for his other career was a twitcher, or bird watcher, and has hosted numerous television series about bird watching and nature. Now in his seventies, Bill Oddie's latest work of non-fiction is Unplucked, a collection of essays, magazine articles and blogs that all focus on his work as a twitcher, as well as offering the odd hint of autobiography.

A laid back and interesting read, some of the articles are quite amusing (such as the one about the tiger,) many others explain various tidbits about birdwatching in a way that is both interesting and accessible to readers like myself who don't know all that much about the native birds of Great Britain, or the particulars about bird watching. Although there are hints of autobiography in there, this book is not intended as such--indeed, Oddie released his autobiography One Flew Into the Cuckoos Egg several years ago. There is also more than a mention of mental illness and bipolar disorder, which, undiagnosed for most of his life, led to Oddie being sacked from a popular nature television series, which became a major career blow.

Ultimately, Unplucked is an enjoyable and accessible read that may inspire fits of laughter ... and a bout of birdwatching.
Bill Oddie The Goodies Unplucked