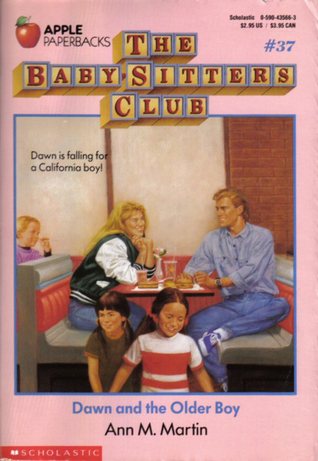 Kristy, Claudia, Stacey, Mary Anne, Dawn, Mallory, Jessi. If these names mean anything to you, then at some point during your childhood you probably read at least one (if not several or all,) Babysitters Club books. If you're really sharp, you will have also just noticed that I listed the characters in the order in which their first book of the series was released. If you're a true fan, you'll probably notice that I left Abby off the list. And you probably don't care.

All of the characters had their set personalities. Kristy was the tomboy, Claudia was the artsy underachiever, Stacey was the cool New Yorker, Mary Anne was the shy one, Mallory was the awkward kid who dreamed of better things, and Jessi was a dancer with a big heart.

And then there was Dawn.

Of the seven core characters (sorry Abby,) Dawn was probably the greatest enigma. Dawn's role in the BSC as the 'alternate officer' because unlike the other four members she didn't have any particular quality that would make her a good president, vice president, secretary or treasurer, yet she was capable enough to be able to pick up any of the tasks if one of the other girls were absent and it was required of her. She was a vegetarian and her clothing was described as 'California Casual.' (I had no idea what that meant when I was nine years old and I still have no idea now.) Later, she became interested in Environmental issues.

Dawn was introduced to the series in the fourth novel Mary Anne Saves the Day as a new girl who had moved to Stoneybrook from California, where she was essentially a prop for the shy Mary Anne, who is forced to make it on her own after a fight with her childhood best friend, Kristy. We learn that Dawn's parents have recently divorced. Dawn lives with her newly single mother, and younger brother, Jeff. Meanwhile, Mary Anne lives with her father, a widower whose wife died of cancer when Mary Anne was just a baby. And, of course, there is a rather obvious twist, in that it turns out that Dawn's mother and Mary Anne's father were childhood sweethearts. Over the course of the series, their romance would be rekindled and the pair would marry, making Mary Anne and Dawn stepsisters.

The major problem with Dawn's character was that author Ann M Martin seemed to have little or no clue what to do with her. Her stories were an eclectic mix--some focused on her emerging interest in boys, which always seemed to force her to act out (Dawn and the Older Boy, Dawn's Big Date,) while others focused on her struggles with her parents divorce and the fact that her parents now lived on opposite sides of the United States (Dawn on the Coast, Dawn's Wicked Stepsister, Dawn's Family Feud, Dawn's Big Move.) There were also lighthearted moments (The Ghost at Dawn's House) and the downright forgettable (Dawn and the School Spirit War).