September 11, 2016
On select Sundays I will be reviewing some of the old Apple Paperback titles from my childhood. These titles were published, or republished by Scholastic during the 1980s & 1990s and were written and set in the United States. In Australia, these books were typically only available from libraries or could be ordered through catalogues that were distributed through primary schools, though some popular series found their way into various bookshops. Most of these titles are now long out of print or have been updated and republished for later generations ... 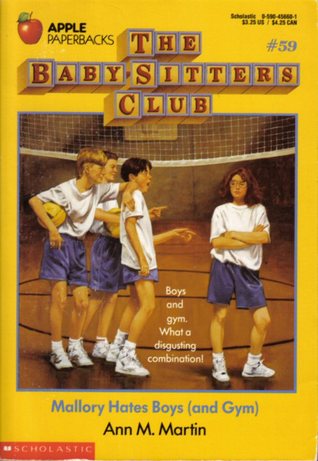 Initially, when I decided to write these reviews, I made the decision to skip The Babysitters Club series, as it has been mentioned on this blog before, and also because there are already many, many reviews and nostalgia posts on each of the books around the web. However, I decided to make an exception for this one. Mallory Hates Boys (and Gym) is surprisingly well, if not well written, then certainly well intentioned for a series that had well and truly started to lose its shine by the time this instalment was published. Written by a ghostwriter and sticking well to the BSC formula (Chapter 2 features the standard recap on who's who, how the BSC was formed and its current state,) and there are the obligatory two chapters that are about other members and their babysitting experiences. However, the A storyline of the book touches on something quite important--gender differences and the difficulty that some kids face in a co-ed class at school.

Mallory Pike was the dorky, klutzy member of the group. Along with Jessi, she was one of the younger members of the club. Unlike her best friend Jessi, however, Mallory is bad at sports and finds herself in a miserable situation when the boys and girl gym classes (I'm guessing this is what they call Phys Ed in the USA,) merge midway through the school year. In gym class, the boys are rough, intimidating and are quick to hone in on the fact that Mallory is not very good at volleyball. The boys humiliate her on several occasions, the teacher does not seem to care and the other kids are disappointed that Mallory is letting their team down. Anyway, the main focus of the story is that Mallory feels intimidated by the boys and decides that all boys are, essentially, jerks. Parts of the story are resolved in a peculiar fashion (Mallory and her friend Ben "swap" brothers for a while,) and there is a moral about Mallory standing up for herself to the gym teacher, who slowly becomes a bit more understanding and realises that the behaviour from some of the boys is affecting Mallory's ability to learn. And then, because this is a BSC book and there is always some kind of moral, the gym class moves on to do archery, and Mallory turns out to be a natural and even makes the school team.

Although a little over-the-top at times, I think this one nailed the experiences that some kids, especially quite ones like Mallory, face at co-ed schools. To some girls, the boys can appear rough and cruel, while to such boys, anyone who does not enjoy their antics is considered weak. Unsurprisingly, and as is often the case in real life, it is only Mallory's behaviour that goes punished, while the boys are allowed to carry on, and they are in some senses, encouraged.

This is probably a great book for any kid who has found themselves in a similar situation.

About the Author: Ann M. Martin is the original author of The Babysitters Club series, and has written a number of other books for middle-grade readers and a few books for young adults.

About the Ghostwriter: Suzanne Weyn began her career as an editor at Scholastic. As well as ghostwriting some of the books in The Babysitters Club series she is the author of a number of varied book and series for children and young adult readers.
Ann M. Martin Apple Paperbacks Suzanne Weyn The Baby-sitters Club