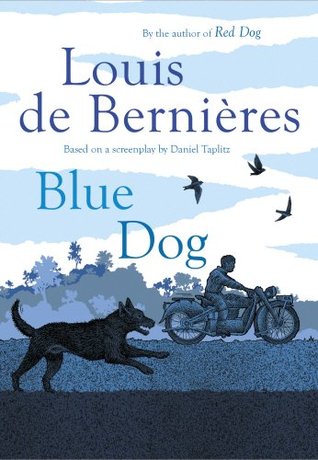 Blue Dog is a charming story of a boy and his dog set in the Pilbara. Eleven year old Mick has been sent to live with his Granpa following the sudden death of his father and his mother's subsequent breakdown. Set sometime in the late 1960s (or possibly the early 1970s) this short children's novel tells the story of how Mick adjusts to life in the outback and how he rescues a puppy, Blue, after a cyclone and the pair form a strong bond. Over the next two years, Mick has enjoys many adventures in the outback with Blue and whilst riding his motorcycle, taming a horse and a crush on his teacher which has surprising consequences when he finally decides to battle his 'rival' for her affections.

This one was an enjoyable tale that I found myself reading in small, one-chapter-a-night doses and found myself feeling quite sad when I finally finished this slim volume--more than a week after I started it.

Blue Dog is a prequel to Red Dog, (which explains the beloved dog's life before being discovered on the road to Dampier,) and was adapted from a film script. The film will be released on December 26.

Special thanks and shout out to my mum for lending me her copy of Blue Dog to read and review.
Blue Dog Louis de Bernieres Red Dog