Review: The Other Side of the Season by Jenn J McLeod 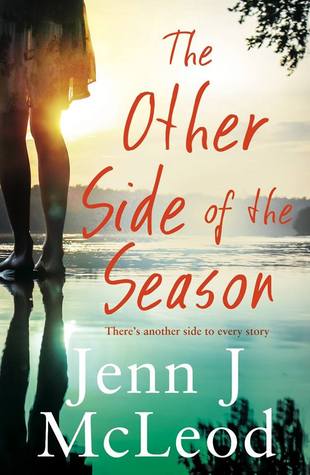 In The Other Side of the Season Australian author Jenn J McLeod takes us to Watercolour Cove, a small seaside town where the choices, and tragedies, of one generation will impact on the lives of the next. In 1978 David, Matthew, Albie and Tilly are living on neighbouring banana plantations on the top of a town that is known as Dinghy Bay. David and Matthew are brothers, while Albie and Tilly are the adopted children of the couple who own the plantation next door. Life is simple and fun, until adult problems start to get in the way. Aspiring artist David wants to go to university,  with him, Matthew is jealous of David and Albie is perhaps not-so-secretly besotted with his adopted sister. As for Tilly, her heart lies with David, and she knows that one day she is going to leave the small town that she hates, and pursue her love of art. Anyway, a series of events, each one worse than the last, has some pretty serious consequences and will shape the lives of David, Matthew, Albie and Tilly.

In a parallel story set in 2015, thirty-five year old Sidney (named after artist Sidney Nolan,) and her brother Jake visit Watercolour Cove, a small town that was once home to the grandfather that they never knew. They stumble upon an art gallery at what was once a banana plantation, and Sidney soon makes a friend out of its owner, David. It is probably a generational thing, but of each of the characters, I found Sidney the easiest to identify with. I felt a lot of empathy, and admiration, for her--she was a woman who chose her principles, and her unborn child, over a man and had the strength of character to see it through with no regrets. (One central character, I suspect, is far prouder of her than what she lets on.)

The author cleverly drip feeds information to readers, allowing them to piece the story together bit-by-bit and to discover each side of the story. I struggled with Natalie's character at first, feeling anger and contempt at some of the decisions that she made, but by the end of the story, I had a strong understanding of how her early years had been shaped by events that were out of her control, and that in turn had shaped her as an adult. And, of course, its easy for people to make mistakes and poor choices when they are young, especially when they do not have much guidance.

We also see how Natalie works to right the wrongs of the past, and I found myself admiring her tenacity. As the cover suggests, there is always more than one side to a story, and author Jenn J McLeod handles her characters with a very real and genuine respect.

I also admired the courage that Sidney had, choosing her baby over her partner, and I found myself wishing that the ratbagish (but fun) Jake featured a bit more within the narrative. The ending was a bit tearful, but entirely appropriate.