April 24, 2016
On select Sundays I will be reviewing some of the old Apple Paperback titles from my childhood. These titles were published, or republished by Scholastic during the 1980s & 1990s and were written and set in the United States. In Australia, these books were typically only available from libraries or could be ordered through catalogues that were distributed through primary schools. Most of these titles are now long out of print or have been updated and republished for later generations ... 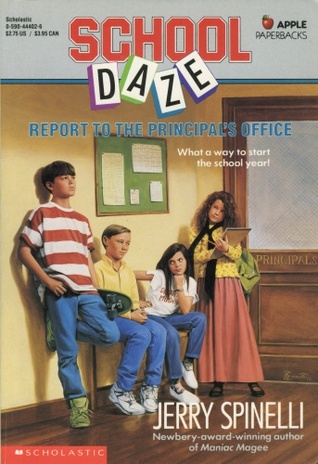 School Daze was a four book series set in the newly built and established Plumfield Middle School. It centred around four very different kids from the sixth grade (two boys and two girls) and their quirky new principal Mr T. Charles Brimlow. I still have my original copy--the one that my parents bought me for my eleventh birthday. I'm pretty sure that at one stage I had the full set, but I have no idea what happened to the other three books. In fact, I can't even really remember the other three books at all, but for the fact that one of them featured a giant skateboard.

Anyway, Report to the Principal's Office is a quirky story that introduces the four main characters and sets the scene for the rest of the series. There is Sunny, who is, ironically a grouch, and who is currently refusing to shower until she gets transferred to the neighbouring middle school so that she can be with her best friend. Next is the Eddie, a shy, nerdy kid who falls prey to a bunch of bullies and who isn't sure that he can cope with the pressures of middle school. Third is Salem, a boorish aspiring writer who tries to turn everything in to a special occasion. And finally, there is Pickles, a quirky 'cool' kid who rides a green skateboard and who likes inventing things. Anyway, the kids meet after they are all invited to have lunch with the principal, who wants to have a meeting with a few kids from each grade, the ones that he considers to be special and interesting.

Through some quirky adventures during the first couple of weeks, the kids find their place at the school and bond after a surprising adventure involving the school mascot.

This one was a lot of fun to re-read.

The School Daze series has twice been reissued and republished by Scholastic--in 1999 and 2008 and is currently out of print.
About the author: Jerry Spinelli was the author of a number of children's books, some of them published by Apple Paperbacks. His novels include the award winning book for children, Maniac Magee.