Review: Prayers for the Stolen by Jennifer Clement 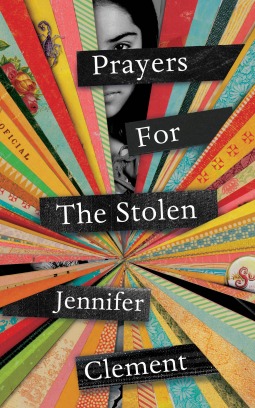 Prayers for the Stolen is a vivid and gut-wrenching tale of a reality that is all too real for many women who live in Mexico--the fear of being stolen. For these women, and especially girls and young women, the threat of being stolen and then trafficked and sold is all too real. They come up with innovative ways to keep safe--dressing their girls as boys, altering their appearance so that they may be considered too ugly to be stolen, and digging holes where the girls may hide when they hear the SUVs coming.

Set in the mountains of Mexico, the novel beings with a truly haunting sentence, Now we make you ugly, my mother said. From there, the story focuses on the protagonist Ladydi, mother and their friends and neighbours as they suffer all kinds of hardships that the authorities care nothing about. There is Paula, who is stolen but eventually escapes, Ruth who was found in a garbage bin and grows up to become a beautician, Maria who is born with a hare lip and Estafani whose mother contracts HIV which, due to a lack of medical intervention develops into full blown AIDS. The women are so poor, and so cut off that no one really cares for them--teachers often don't show up at their village and more shockingly, poisons that the military are supposed to dump on opium crops often end up sprayed dumped on their village instead.

Ladydi's own path includes a stint in jail and her struggles show the sheer love and loyalty that these women ultimately have for one another.

At times bleak, and at times filled magic realism and a little dark humour, Prayers for the Stolen is an unflinchingly real look at the lives of women in a time and a place where anything can happen for them and the authorities rarely care.

For anyone who gives a damn about human rights.