Blog Tour Review: All These Perfect Strangers by Aoife Clifford 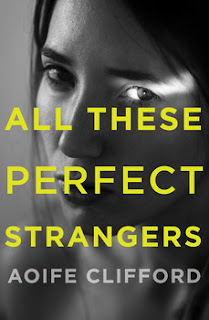 Conflicting evidence, an unreliable narrator and a morally ambigious story make All These Perfect Strangers one of the most intriguing novels that I have encountered so far in 2016. Pen Sheppard is an unwelcome resident in her small town, and has recently left university under a dark cloud. The novel opens with Pen visiting her psychiatrist, before moving between the past and the present to tell of Pen's unusual--and traumatic--experiences at university, while also addressing the reason that Pen is hated by nearly everyone in her small town.

The story is so complex that I found my feelings toward Pen ebb back and forth several times throughout the narrative. On the surface, it is a story about a young woman who is in the wrong place at the wrong time, suffers a trauma, is ostracised by the people in her home town and then lucky enough to win the perfect escape a scholarship to a university ... where she is unlucky enough to find herself in the middle of a situation that is as difficult as it is dangerous. But once I started looking a little more closely, and re-reading key passages it became obvious that much like all of the other characters Pen is not entirely innocent--often lying to her psychiatrist--and that (if Pen's version of events are reliable,) there is a lot more to her former school friend Tracey and also the people whom she meets at university--many of whom have their own hang ups, insecurities and their own shocking motives. Reading this one made me feel as if the question of "who is responsible and for what" were somewhat secondary to the exploration of the darker side of human nature. There is also the question of whether or not Pen's own real worst enemy is herself--it certainly seems that she wants other people to think so.
Set in 1990, this story takes place well before the widespread intrusion of mobile phones and the internet and the story is all better for it. The locations are barely described at all, the small town where Pen lives could be located in any state of Australia, so too could her university. And this all adds to the feel of the novel, which can be dark and claustrophobic at times.

A solid debut novel from an Australian writer. Recommended.

Thank you to Simon and Schuster Australia for my beautiful ARC.

Don't forget to stop by and read the many other wonderful reviews for this book that will be appearing this week as part of the All These Perfect Strangers Blog Tour. 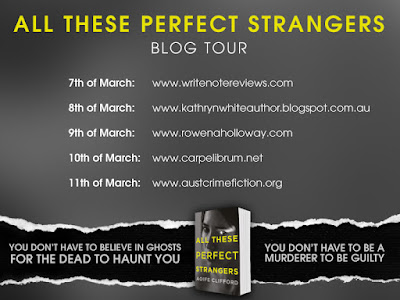