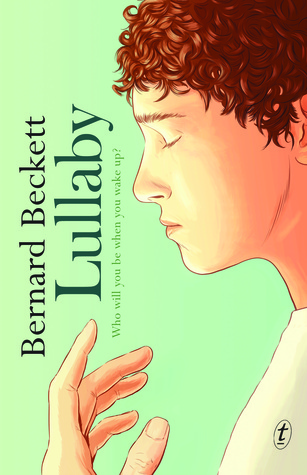 Although Lullaby is classified as YA there is plenty in this short novel to hook and, ultimately, challenge adult readers as well. Set in New Zealand, sometime in the near future, it opens with eighteen year old Rene, who is one of identical twins, at a hospital, speaking with a young psychologist who is tasked with checking if he is capable of making a decision to allow the hospital to undertake a procedure that is risky, unethical and of no value to his twin brother who is already classified as brain dead, though it might help him to gain a 'new life.'

Most of the first half of the novel focuses on Rene's conversation with psychologist Maggie, as he reflects on his childhood and his relationship with Theo. Although identical twins, the pair have stark differences, and the novel has much to say on themes of duality and ego. Rene is not the nicest of teenagers, but then again, neither was Theo, though it is obvious that they care about one another. Despite the tough façade, we can see that Rene is hurting and we can also see that he is not taking his decision lightly. Maggie is a professional who is stretched by the boundaries of inexperience, a lack of time, and ultimately, her own ethics (which do not necessarily align with those of her employer.) The only other player in the story is Rene's girlfriend Emily, whose cunning has clever, but catastrophic consequences toward the end of the novel. The ending itself is left quite open and one can only ponder at Rene's future.

I enjoyed reading this one, and it left me pondering a bit at notions of self--is memory and circumstance what makes us what we are, or is it something entirely different?

Although complex, the book is just as long as it needs to be (and no more) to tell the story. I bought Lullaby from the book tent at Writers' Week and read most of it on the train journey home.