Review: Not If I See You First by Eric Lindstrom 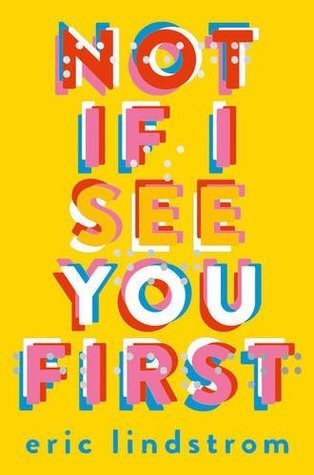 Eric Lindstrom's debut novel is a clever YA read featuring a protagonist who is just trying to survive high school, the loss of her parents and heartbreak the best way she knows how. Parker is funny, clever, a skilled runner who wants to try out for the track team and she and her best friend Sarah offer relationship advice to other students at the beginning of each day. Parker also happens to be blind, and she has a list of rules that she would like you to follow.

The most important rule is this:

There are no second chances. Violate my trust and I'll never trust you again. Betrayal is unforgivable. (Page 39.)

This is not the first book that I have read that features a teenager with a disability, however, what makes this book stand out from the crowd, is that Parker isn't this perfect kid who we are all supposed to feel sorry for. Parker has her flaws. She's bitchy and arrogant, occasionally rule, plays on her disability at times, and can often be self-centred. It is also clear that she's had a tough time--losing her mother and her eyesight at age seven after a drink driving incident, and now she has lost her father to an accidental overdose. And it should be clear to readers that, underneath all that, Parker might just have a heart of gold.

Most of this book centres on the first few weeks of Parker's junior year at high school--a few months have passed since her father died, and her high school has recently merged with another, meaning that there is a host of new kids for her to become familiar with, including Molly, who is paired with her as part of a buddy system, and Scott, a boy who went to her middle school ... and who was responsible for a massive betrayal and is the reason that the no second chances rule exists. Over these weeks, various events help Parker to grow and mature, and to discover that sometimes there can be more than one side of the story and that her rules may occasionally be broken.

I enjoyed reading this one, and think that it made for a great and original YA novel. It was also a lot of fun working out what the braille on the front cover meant--and when I found out, it felt that it was entirely appropriate for the story. Don't expect long descriptions, filled with sensory detail, the writing itself is short, fast and tends to concentrate on events and Parker's emotional reactions to them.

Recommended.
Eric Lindstrom Not If I See You First