Not Another Teen Book Review: Girl Talk by L.E. Blair

March 13, 2016
Not another teen book review is a semi-regular feature on this blog that comments on mass market fiction from the 1980s & 1990s that featured teenage characters and teenage themes ... and was lapped up by eleven year olds. This time around I am talking about Girl Talk, a series from the early 1990s. 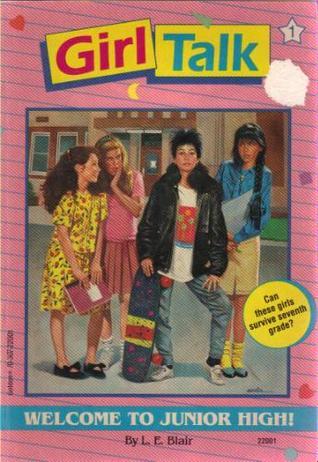 Published by Golden, the same company responsible for the Little Golden Books Girl Talk was a chatty, gossipy series of books pitched at girls that was, surprisingly, inspired by a board game of the same name. These short books (all with similar pink covers,) featured a short 'meet the characters' at the front, a summery of what each character thought of the topic that was being explored in the book, and a chapter that was devoted to a telephone conversation between all (or occasionally, only some,) of the characters. At the end of each book, readers were invited to fill out a survey on what they thought about the series that, for the cost of a stamp, could then be posted back to the publisher. The books examined issues that were relevant to kids, such as caring for the environment, sexism, blended families and--who can forget--puppy love. The writing style itself kept the books very simple, and the competitions at the back of the book were open only to kids aged between seven and fifteen, suggesting that the publisher was aiming for a very broad audience. (Consider, The Babysitters Club was pitched firmly at kids aged between nine and twelve as was Sweet Valley Twins and The Saddle Club.) In other words, Girl Talk was pitched more at emerging readers, rather than established ones.

The main characters were Sabrina, an extroverted and occasionally funny girl who wants to be an actress when she grows up and her quiet but determined best friend Katie. Completing the group was wacky, just-moved-from New York, Randy, who rode a skateboard and wore outrageous clothes and Allison, a quiet girl of Native American ancestry who became a supermodel at one point in the series. Anyway, I found a couple of these for 25 cents each at my local op shop and I thought that it would be fun to bring them home and review them. The short reviews are below ...

Sabrina reads in her horoscope that romance is in the air. When she starts receiving anonymous love letters at school, it seems that her horoscope is coming true, and she jumps to the conclusion that they are being sent to her by Mr Grey, her "cute" social studies teacher. But it all turns out to be a prank played by her twin brother Sam, with the help of Winslow, a nerdy boy from her class. Sabrina gets sweet revenge on her brother ... with Winslow's help! 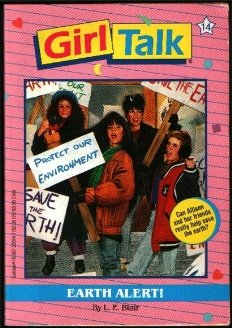 Narrated by Allison, this one features a bit of an aggressive cover and is probably one of the more topical books in the series. It begins with a popular trope, a new and very cute boy moves to town and starts at Bradley Junior High. Arizonna is a surfer from California and speaks like what one might get if they successfully crossed Keanu Reeves with one of the Teenage Mutant Ninja Turtles. (Gnarly.) All the girls like him, but he seems to be completely besotted with Allison. Anyway, in a surprise but endearing twist, Allison finds Arizonna and his attention at bit annoying (she does not like the way that he always addresses her by her first name and her surname, Allison Cloud, and I cannot say that I blame her,) and in any case, she is already dating Billy and wants to stay faithful to him. At the same time, Allison is co-chairperson of Earth Alert, an upcoming school environmental awareness fair, that soon gets hijacked and ruined by Stacey and her friends. Allison and the others soon realise that their cause is more important than a fair, and rally together to make the school do more to help the environment (such as not using styrofoam trays in the cafeteria.) This earns the gang detention, though the principal agrees to review some of the school policies.

The author of Girl Talk was L.E. Blair, a pseudonym for children's fantasy author Katherine Applegate.