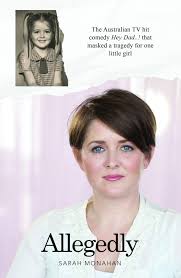 Like many kids in Australia who grew up in the 1980s and early 1990s I was familiar with an Australian sitcom titled Hey Dad...! and would tune in every week--in fact to this day I can tell you that in Adelaide new episodes of Hey Dad...! used air on SAS 7 at 7.30pm on Wednesdays, and remember the distinctive opening credits that used real photos of each of the actors. And just like the rest of the Australian public, I had no idea of the horrific abuse that took place on the set, until the story became public.

In fact, it was the first time in Australian history that a former child actor had come public with such a story--and, more shockingly, one that had been known on the set of Hey Dad...! for almost the whole of its eight year run, though no one would do anything about it.

Sarah Monahan played Jenny Kelly, the youngest member of the Kelly family. She was abused by Robert Hughes, the actor who played Martin Kelly, her on screen dad and the star of the series, and who now, thanks to Sarah's bravery, is serving a lengthy jail sentence. Hughes was also charged and convicted of abusing a number of other women. (Many other women came forward about their own horrific experiences with Hughes after Sarah Monahan's story became public.)

In Allegedly Sarah Monahan tells us her story--that of a child who found herself working in the adult world of television with limited supervision and how she grew up to be a strong and capable woman who not only had the guts to speak up about what had happened to her on the set, but who served with the US military (Monahan is a duel Australian/US citizen,) has worked in IT, who cared for her husband after he was attacked and who has travelled extensively. The book itself is written in a friendly, but matter-of-fact style and focuses on the importance for justice for victims of abuse.