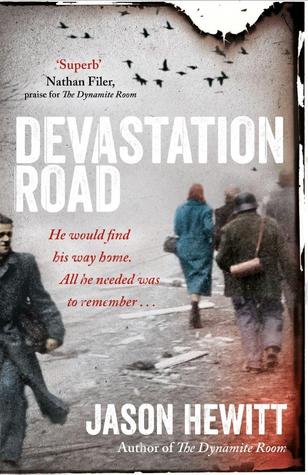 Devastation Road was a novel that caught me completely by surprise. When I picked it up, I expected quite a different book to the complex--and better--story that was told. The setting is Europe in the spring of 1945. Owen has lost his memory, though he knows his name and that he can remember joining the British army while the second world war was in its early stages. Now a war that he cannot remember has been won and he knows that he needs to find his way home. Meanwhile, his two unlikely travelling companions have their own tragic stories and their own reasons for making the journey across Europe--Irena is a Polish Jew, who fell pregnant after being raped and wants to hand the child to its father and leave it there, and Janek is a teenage boy who wants to be reunited with his family, who were captured by German soldiers. In their own way, each of the characters shows how Europe was changed--and left devastated--by the second world war. This is a story of people who are displaced and who are looking for people, and for places, that may not exist any more.

As I said, this one caught me by surprise and rather pleasantly. Although it is set in a very particular time and place, there was an odd sense of timelessness to the story as well, which made it quite relatable. It also made me stop and think about current world events--leaders and technology may have changed, and different wars are fought, but there are still many, many people who are displaced and are searching for their families and homes much like the characters in this book.

Thank you to Simon and Schuster Australia for my reading copy.
Devastation Road Jason Hewitt