November 06, 2015
Hi everyone and welcome to the final stop on The Enchanted Island Blog tour. I've been following the tour closely and there have been some excellent posts, and now I'm massively, massively excited because it's my turn. Today I'll be chatting with Ellie about her new book, Hy Brasil the success of Reluctantly Charmed and some lovely surfers ...

Hi Ellie and welcome back to Kathryn’s Inbox. When we last spoke, you were preparing for the release of your debut novel Reluctantly Charmed, which went on to be the fourth highest selling Australian debut novel of 2014. (And congratulations on that, by the way.) Were you blown away by the success of Reluctantly Charmed, or were you quietly confident all along … ?

Blown away is putting it mildly!  I couldn’t believe it.  To put it in context, this was a book that had taken me years to get published, had been rejected countless times and had been recommended by one particular agent that it should be thrown on the scrap heap.    To say I was shocked was an understatement, not only to be published, but to get rave reviews and then to actually have a best seller on my hands was mind numbing, it still is actually.  It’s an incredible feeling to know that my story is out there, hopefully making people smile and bringing enjoyment to their day.

And now, of course, the purpose of this interview is to talk about your new novel The 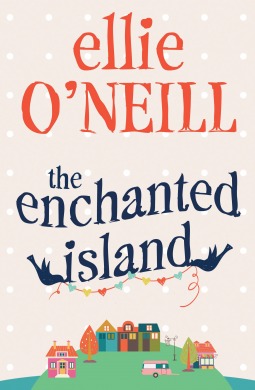 Enchanted Island, which I have just finished reading and enjoyed. Can you tell us a little about the novel?

This story is set on a mythical island off the west coast of Ireland.  The island, Hy Brasil is a strange and isolated place that has gone under the radar for hundreds of years.  The inhabitants of the island will stop at nothing to protect their happy, contented lives from any external influences. What transpires is that it’s not just their lifestyle that they’re protecting they’re also harbouring a devastating secret.

When my main character, Maeve O’Brien gets sent there for work, she has no idea what’s going on but is more than a little put out by the hostile reception she receives.  It’s as if the island itself wants her gone, but overtime she too gets seduced by this magical treacherous place.  What unfolds is a story of love, protection and the price of happiness.

Did you have fun mixing the myth of Hy Brasil with a contemporary setting?

Yes, absolutely.  Hy Brasil doesn’t exist, but there are some beautifully bleak and isolated islands off the coast of Ireland that I have visited and used for research purposes.  Places that have developed their own identities unique from mainlanders, their own traits and characteristics, stories, heroes and histories.  It’s always interesting to see how communities develop independently, so I drew on those places for inspiration while developing a mythical, slightly magical place, if that makes sense.

No good story is complete without a swoon-worthy hero. Can you tell us a little about Killian …

Isn’t he fabulous?  He is a straight forward uncomplicated man, he doesn’t play games.  He knows the life that he wants to live, and what’s really important to him.  He’s not into a superficial lifestyle, he likes peace, and serenity, and did I mention how handsome he is, with his sexy green eyes.

What has been the best part about your journey as an author so far?

There have been so many highs I can’t even begin to count.  One really special moment that sticks out was about a week before Reluctantly Charmed came out, I was in Melbourne with my Mum and we randomly called into WH Smith, just to see if it had popped onto the shelves a little early, we really didn’t expect to see it but there it was.  We screamed hysterically, jumped up and down, and bear hugged the staff.  It was incredible to see my book propped up side by side with authors I knew and admired, it was a real book, not just a dream in my head.  It was so so lovely that I got to share that moment with Mum.

A long time ago, I had a massive crush on a very blonde, sexy, surfy guy from Adelaide, so now anytime I think of Adelaide a parade of drop dead gorgeous men scoot into my imagination.  It’s a pretty good word association to have!  But that asides I hope people get to the beach this summer and tuck a copy of The Enchanted Island under their arm, and enjoy the read.  I would absolutely love to hear from you
Ellie O'Neill Reluctantly Charmed The Enchanted Island