Review: Not Another Happy Ending by David Solomons 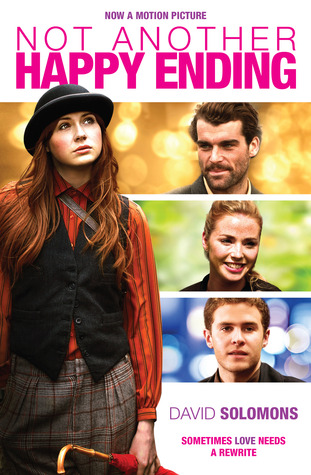 It is not often that at book based on a screenplay turns out to be a winner, but Not Another Happy Ending proved itself to be one of those rare gems. Author David Solomon also wrote the screenplay for this quirky, set-in-Scotland, romantic comedy that pokes fun at the publishing industry, so it is no surprise that the story survives the transition from screen to print. The film/novel tells the story of Jane Lockheart, a twenty-something aspiring writer and lover of all things miserable, whose novel goes on to be a surprise literary hit. She also enjoys a brief relationship with her editor, but then all of her success goes on to make her rather happy, which destroys not only her relationship, but leaves her with a terrible case of writers block. Ex-boyfriend Tom is quick to realise that Jane's happiness is getting in the way of her becoming a successful writer so he goes about in a cruel-but-ultimately-disastrous attempt at making her unhappy. There is a couple of twists and turns, but mostly the comedy revolves around Tom's many failed attempts at making Jane miserable, along with his unwillingness to admit that he is still in love with Jane. It's not a plot that is terribly deep and nor is it going to please everyone. I struggled to identify with Jane and feel that the story may have been more interesting had it been told entirely from Tom's perspective--I think the author had a better understanding of this character and his motivations, whereas Jane came across as quite unremarkable despite possessing a number of quirks. There are a few romantic comedy cliches--i.e. kissing in the rain, a leading lady who loves Jane Austen, but these feel delightfully ironic, rather than annoying.

This one could have been a hell of a lot deeper and there are a lot of digs at the publishing industry (I had to laugh when one of Tom's ideas on how he could make Jane unhappy was to show her what bloggers were saying about her book,) but Not Another Happy Ending remains fun, light entertainment. This one is recommended for a lazy afternoon or evening.