Review: In the Winter Dark by Tim Winton 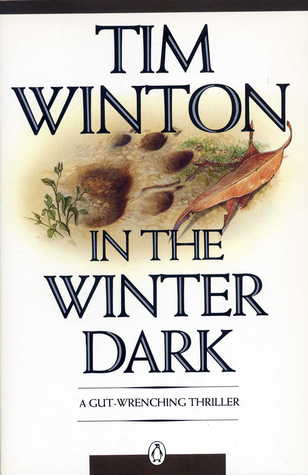 One of Australian author Tim Winton's most intriguing tales is this short novella, set in an isolated valley known as the Sink. There are only four characters in this book--two men and two women. Through their harrowing experiences, the question is raised, which is more dangerous--the outside world or what lies within us?

The novella opens with Maurice Stubbs, an older man who has lived in the valley with his wife Ida for many years. When the novella opens, the horror is already over, but Maurice explains to us that he is going to explain all that happened. He also further explains that he knows the others and their experiences so well, that he will be able to tell their versions of the story just as easily as his own. In other words, we the readers, are to put our trust in Maurice.

We meet the other three people in this tale, Ida, Murray Jacob (known as Jacob,) and Ronnie. The scene then shifts back to a year earlier when, an unknown and unnamed horrible thing swept through the valley, killing a number of animals--including a dog that is quite literally pulled from its chain. Although almost strangers before, Jacob and the pregnant and recently abandoned by her partner Ronnie team up and a romance begins to flourish. Together they further team up with Maurice and Ida and do their best to fight the horrible thing, which eventually culminates in a surprising but tragic showdown.

In the Winter Dark was very quick, though challenging reading. It was interesting to piece together all of the things that were left unsaid at the end of the novel to gain a better understanding of the story and its moral and it lingered in my mind for a little while afterward. This is a brilliant, well-written tale, though I suspect it will not suit every taste. There are no hard and fast conclusions at the end of the story--the reader has to work that out alone and there is no real sense of closure. Nor does it quite pack quite the same punch of a fully-fledged horror novel, rather it's a glimpse of the dark side of humanity. Recommended, though it may not be what all readers are looking for.
In the Winter Dark Tim Winton