May 28, 2014
Welcome back to Writers on Wednesday. This week, I put my questions to Kat Smutz author of Spies on Neither Side ... 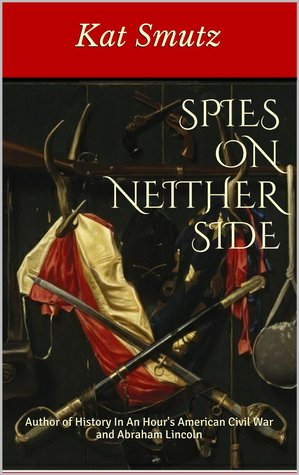 I've always been sort of an independent thinker, always curious about everything and questioning whatever I didn't understand, and going where life leads me.  I studied engineering in collge, tried my hand at law enforcement, and somehow ended up in journalism, first in radio and then with newspapers.  Writing fiction was something that began in high school, and became my source of escapism.  Anyone who ever read any of my work always told me I should get it published.  So, when we reposted to Maine, my husband told me it was time to stay home and work on getting published.  I had no idea where to start.  Then, I had a history website begin following me on Twitter, and I began writing for them.  I had become addicted to history in college and I knew a lot about the American Civil War era.  So, History In An Hour asked me to do two books for them, one on slavery and the next on the war itself.

I've released two new books in the last few months.  One is a third history book called Abraham Lincoln In An Hour, and the other is my first fiction release, a historical fiction novel called, Spies On Neither Side.  It focuses on a part of the American Civil War that you don't hear a lot about, which is what was going on in the American West during the war.  The main character is a young woman who is cut off from her family by the war and she turns to spying to earn a living.  But she's not a spy for the North or the South.  Her job is to gather information for a group of investors in England.  She's a neutral party, but if she gets caught, she'll still be hung as a spy.  She manages to survive the war without a lot of trouble until one of the people she works for shows up.  It causes so much trouble that she has to leave, and go back to her family.  But her troubles aren't over.  Her family has fled to England to ride out the war and the American government wants her out of the country.

The characters, of course, are fictional, but the circumstances are quite real.  The border was a rather chaotic place during the war and there were quite a few female spies.  I've tried to keep the romance to a minimum, so, even the guys might enjoy reading it.

I had been published before as a journalist.  Another writer once referred to me as 'the most overworked and underpaid journalist in West Texas.'  As for books, I started writing articles for History In An Hour, and after a few months, I was asked to write American Slavery In An Hour.  It is part of the History In An Hour series, which is designed for people who have an interest in history, but only want a general overview.  They're usually less than 20,000 words.  It was an opportunity to learn how publishing worked so that I could get my fiction published.

Getting published at all was a big thrill when my first book came out.  But I think my third history book, Abraham Lincoln In An Hour is the best of the three.  Within days, it was on the top ten list in the UK.  (At least, that's what I've been told.)  But I think as time goes on and I learn more and more about writing and publishing, my work will get better, and that my best work is yet to come.

I'm always working on something.  Sometimes, it's going back to something I've already written with a new idea or it might be completely new.  We were in Boston for the marathon this year, and made a side trip out to Salem.  I've had a lot of people ask me about a book on the Salem Witch Trials, so I'm considering proposing that to my editor.  In the meantime, one of my fictional characters is always running wild in my head or a new one is developing.  I have a lot of books I've written but never published, and I'm trying to decide which one to work on next for publication.

Someplace quiet and comfortable.  I carry my laptop all over the house.  I used to take it everywhere I went until I bought a tablet.  When inspiration hits, you have to write it down or lose it.  I can put notes and ideas into my tablet until I get home, so I don't lose them.

That is a tough question.  I like being able to take my books with me in my tablet so that I can read anywhere, but I love the feel and the smell of actual books.  They're often easier to work with when I'm doing research than ebooks are.  But with ebooks, I don't have to worry about finding space for them.  I keep any books I buy for research and I'm running out of space for them.

I'm not sure there is a 'one book' that everybody should read.  People have such a wide range of interests, and there are good writers out there writing about all of it.  Personally, my favorite book is The Mists of Avalon by Morgan Llewellyn.

I'd love to visit.  New places and new people always inspire me to write.  If you decide to read one of my books, I'd like to know what you think.  Productive feedback is always welcome.

American Slavery In An Hour, American Civil War In An Hour, and Abraham Lincoln In An Hour are all available from just about every ebook seller, including Amazon.