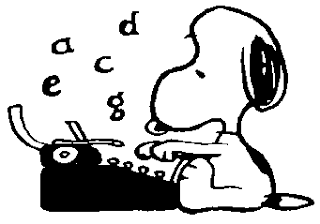 A few years ago, I took one of those cute little internet quizzes, to find out which character from Peanuts was closest to my personality. Half terrified that the answer awaiting me in cyberspace was Lucy Van Pelt, I was pleasantly surprised when, instead, the result was Snoopy.

Out of all of the characters from the Peanuts gang, I think that Snoopy is not only the nicest, but the most loyal and the most complex. Initially a minor character, a non-speaking beagle that belongs to the original star of the comics, Charlie Brown, Snoopy began to develop a real personality of his own. Unlike other dogs, Snoopy didn't sleep inside his kennel, he preferred to sit on top. Often, his friend Woodstock would be by his side, or he would sitting at his typewriter, writing what he hoped would be his breakthrough novel. He could become hurt by rejection (in one strip he wrote a letter back to the publisher who had rejected him, stating that he was unable to accept the rejection at this time,) and could often experience writers block, being completely unable to move on from the opening sentence 'It was a dark and stormy night.' (A dark and stormy night being, of course, the famous cliche that all writers are advised to avoid.) Snoopy's loyalty to those around him knew no bounds, he often tried to cheer the other members of the gang up, despite their indifference toward him. (With the possible exception of Peppermint Patty, who believed that Snoopy was a funny looking kid that Charlie Brown knew and subsequently developed a crush on him.) But the most wonderful thing about this small beagle was undoubtably his imagination. He could take on many different personalities, such as the Flying Ace (which came complete with a scarf and goggles,) or Joe Cool (Snoopy in a sweater and sunglasses). Am I half the things that Snoopy is? Hmm, maybe not. But I do feel that Snoopy was always a good, honest character, there to help the others without expecting a thing in return and always remaining true to himself, his unique world view and his dreams, making him a rare but wonderful comic character.
Peanuts Snoopy