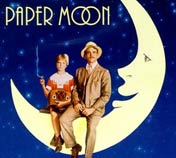 Addie Pray is a book that has received consistent five star reviews, has millions of copies in print and was made into a successful feature film that earned Tatum O'Neil an Oscar, but chances are, you have never heard of it. That is because the book was retitled in 1972 to fit in with the film it inspired, Paper Moon. I'm sure that most of you are aware of the film, which tells the story of a young girl, who, following the death of her mother is taken partway across the country by a man who may or may not be her father. The man, Moses Pray is a terrific conman and the girl, Addie, soon displays a talent in the same area. Set against the backdrop of the depression, the pair have a good time and learn a few harsh life lessons as they indulge in get rich quick schemes and rip-off various people, most notably by selling bibles to rich widows. The leads were played beautifully by Ryan and Tatum O'Neil, who are, of course, father and daughter in real life.

Reading Addie Pray, I was surprised to discover that the film only covers a small portion of the book. In the book, Addie and Moses experience many more adventures, are often caught, sometimes stop to help those less fortunate (basically they're crooks with a conscience--they rip off those who have more money than sense and sometimes share their wealth with those who are struggling,) and eventually pull one final redemptive act, by conning a conman who was out to embezzle money from an eccentric old widow who had nothing. Addie Pray is a fun book with numerous twists and turns, though the author struggles at times with the voice of the narrator, making Addie seem far older and far less feminine than a nine year old girl. Still, the book remains a perfect distraction and a wonderful companion to the film, Paper Moon.
Addie Pray Joe David Brown Paper Moon Ryan O'Neil Tatum O'Neil