Everyone has a story to tell ... 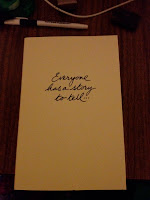 Earlier in the week I entered and was one of the winners of a competition that was running on HarperCollins Australia's facebook page. The prize was an advance copies of an upcoming release. But, there just happens to be a catch. A very, very intriguing catch. The book, which arrived on my doorstep today, has a white cover and the mysterious words, Everyone has a story to tell ... written on the front cover. It is up to me to guess which bestselling author has written this upcoming release.

And well, because keeping something like this to myself would be no fun, I decided to share my guessing journey on my blog.

I have read the first few pages. So far, I am aware that the lead character is named Kitty and she is visiting her terminally ill friend Constance in hospital. The names alone suggest that the book is set in either the United Kingdom or Ireland. Reading further, I discover that the book is indeed set in Ireland.

Hmm. An Irish setting. Could this mean an Irish author? Given that the characters are females, a female Irish author, perhaps?

Who are some best selling female Irish authors? A few names come to mind ...

Could the author be one of these? I shall have to keep reading and investigating ...

boxsey said…
I was also a winner and am 2/3'rds through the book. I'm no closer to knowing who the author is! I misread the info we had...I had thought it was an Australian author, so was thinking too narrowly. I don't think it's Cathy Kelly. I really have no idea! Though, half my problem is that I rarely can clearly remember who wrote what! So...that's confusing!
So far, I haven't found Kitty particularly endearing, whereas I really quite like Constance. I think Kitty is starting to grow on me though.
25 September 2012 at 20:32

I agree, I loved Constance, but Kitty has taken a long time to grow on me. It is lovely to watch her character grow and change through the novel. I suspect the author is Cecelia Ahern, but time will tell!
25 September 2012 at 20:50

boxsey said…
Oh, you are totally right on the author. I've never read her, so was at a disadvantage. I'm done now. I enjoyed it. I did get confused because there were so many characters...I read it over a week, so perhaps if I'd read it quicker, there wouldn't have been much confusion. It was very neatly gathered up at the end...every one falls in love, blah blah. I don't really think Kitty was deserving of Steve...but then, you know...who am I to say who should and shouldn't be together. LOL. Not a bad read....I read it on holiday, and it was perfectly suited for the purpose :-).

Anonymous said…
Good site you have here.. It's hard to find high quality writing like yours nowadays. I honestly appreciate individuals like you! Take care!!
my page :: penilarge najtaniej
25 January 2013 at 16:04