Review: Regretting You by Colleen Hoover 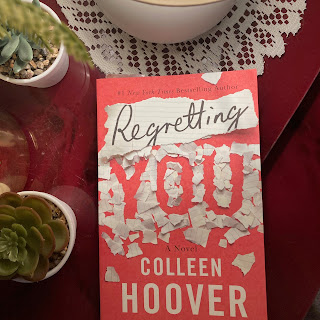 Popularity is a curse. Especially for Colleen Hoover, whose phenomenal success with It Ends With Us has led to some of her lesser known novels being rushed back into print. Regretting You isn't necessarily her finest work or one that has quite the same level of mass market appeal. Told from the duel perspectives of a sixteen year old girl and her mother who is in her early thirties, it uh ... has some vague plot about second chances.
Shortly after her high school graduation Morgan finds out that she is pregnant and puts her dreams on hold so that she can marry her boyfriend, Chris, and be a good mother to her daughter, Clara. Fast forward sixteen years and Morgan is leading a life that is unfulfilling and becoming increasingly complex when her  husband's death reveals a surprising--and crushing--infidelity.
This one reads more like a first draft in need of tightening up than a complete novel. Plot twists and cliffhangers are not told nearly as well as they could be, and occasionally lack impact. While Hoover certainly knows how to create a melodrama and to tug at the heartstrings of her readers, her lack of compelling characters and uneven plotting ultimately let the story down.
Recommended only to die hard Hoover fans who want to complete their collections.
Colleen Hoover Regretting You