Review: After: The Graphic Novel Volume One by Anna Todd and Pablo Andres 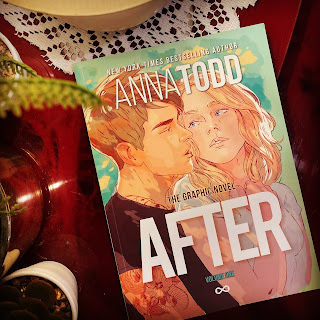 Wait ... what? They made a graphic novel of After, Anna Todd's sexually explicit novel about a toxic relationship and pitched it at a teenage audience?

Then again After has a strange history. It has also been made into a movie that changed the ending to make Hardin's actions a little more forgivable. And the whole thing did start out as a bizarre One Direction fan fiction, with Harry Styles as Hardin.

Yet somehow, even though it shouldn't, this graphic novel ... works.

For those of you that are unfamiliar with the story. After tells the story of Tessa, an intelligent and conservative young woman who has been raised by an overprotective single mother. When she begins college she finds herself constantly thrown in the way of Hardin, the baddest, bad boy of them all who has cruel intentions. What blooms is well, a whole lot of sex and a whole lot of trouble as Tessa steps out into the world and gets her heart broken again and again, while Hardin's life begins to change for the better. The novel has suffered much criticism for romanticising toxic relationships and every adaption, including this one, has toned down some of the most toxic aspects of the story.

What surprised me was just how well the characters and all of their many flaws are brought to life. The most sexually explicit parts of the story are done in a way that leaves much to the readers imagination and it seems to work better for it. The illustrations are just perfect for the characters and capture their differences and the simmering tensions between the pair.Of course, the relationship is and remains very toxic and I'll be interested to see if future volumes address this.

This one was certainly an interesting little oddity, one that works a lot better than it should. Due to the romanticisation of the toxic relationship between the two main characters I would be reluctant to recommend it, instead I'll leave it to the individual to decide whether it is something they are interested in.