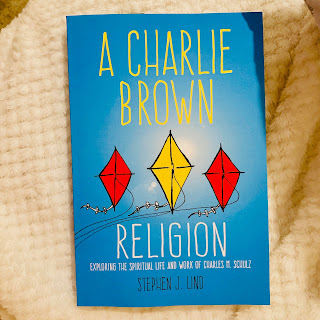 A worthy instalment in the Great Comics Artist Series, A Charlie Brown Religion examines the complex spiritual life of Peanuts creator Charles M Schulz (or Sparky as he was known to his family and friends).

Spirituality is a huge theme within the Peanuts comics, as is philosophy and the struggle of well, being human. Through themes such as the Great Pumpkin, Charlie Brown's struggle with the commercialisation of Christmas and the occasional mention of Christianity, the comics often had a subtle religious flavour to them. This in itself has been discussed (and perhaps misinterpreted,) in books such as The Gospel According to Peanuts. But what was Sparky's real life views on religion and how did it influence his comics?

The answer, according to A Charlie Brown Religion, is complex. Schulz was not raised in a religious family, but chose to embrace Christianity after he returned from military service in the Second World War. From there, the answers are varied and complex. Stephen J Lind examines Schulz life to paint a spirtual autobiography of sorts of a man who was complex--both quietly secure in his beliefs, whilst experiencing doubts. Lind shares numerous Peanuts comics that point to musings on religion. (Personally, I love the line I don't think God really cares who wins a golf tournament.)

Lind's writing is intelligent, knowledgable and well researched. It is written in a way that readers don't necessarily have to share his religious beliefs to find it interesting, whilst remaining one hundred percent respectful of Christianity, which I found refreshing. This is, after all, a look at someone's spiritual life, not a critique on religion itself.

Ultimately A Charlie Brown is an autobiography of man who is both spiritual yet endearingly human, and shines a light on the man who wrote one of the most famous daily comics of all time.