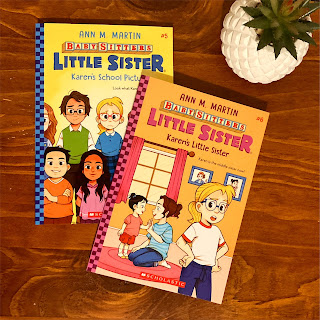 What Baby-Sitters Club fan could ever forget Karen, the imaginative and effervescent stepsister of club president Kristy? After all, Kristy's new family situation and the bond that was quickly forged between the stepsisters was a very important feature of the series. Soon enough, Karen had her own spin-off series pitched at a slightly younger audience, and from then on many fans of the Baby-Sitters Club would discover the series through the Baby-Sitters Little Sister series.
Karen's Little Sister is the sixth book in the series. Like the previous novels in the series it covers topics and lessons that might be important to a child who is six, almost seven years old. Karen lives her life between two radically different households and families. Along with her four year old brother, Andrew, she spends most of her time living in what she has termed the 'Little House' with her mother, her stepfather Seth and their pets. Every second weekend she stays in what she calls the 'Big House' with her father, her stepmother Elizabeth, and Elizabeth's four children Charlie, Sam and Kristy who are all teenagers, and David Michael who is just slightly older than Karen. The household is also home to many pets and Karen believes that Mrs Porter the eccentric older lady who lives next door is actually a witch, which becomes a plot point in various parts of the series. (And was later cleverly adapted into the Babysitters Club Netflix series.) Karen also has a best friend who lives near each house, and all three girls attend the same private school.
As the title suggests, Karen's Little Sister focuses on a new change for Karen. Her father and Elizabeth have recently adopted a two year old, Emily Michelle, who was born in Vietnam. (This event is also covered in the main series in Kristy and the Mother's Day Surprise.) Having Emily around at the Big House means having the fun of a little sister. It means that Elizabeth's Mum, Nannie, also lives there, which Karen likes. It also means a lot of challenges. Emily is sickly, needs a lot of attention and Karen is feeling left out. After all, she's already seen a lot of changes to her family in the past year. It's not easy, especially for an imaginative kid who is used to being the centre of attention. Meanwhile, there is another lesson to be learned at the Little House when Karen finds an injured bird.
This one focuses on age appropriate lessons about family and compassion. The author is careful not to invalidate Karen's feelings, whilst offering a heartwarming solution. (That said, I know that Karen naming her pet rat Emily is meant to be a compliment, it does come across as a little bit mean.) Overall, it is a great book for kids, especially ones who may have found themselves in a new family situation.
Ann M Martin Karen's Little Sister The Baby-sitters Club