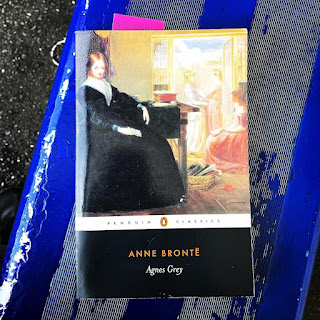 The forgotten or, more to the point, overlooked of the three Bronte sisters, Anne Bronte wrote just two novels before her untimely death from consumption at age 29. (A disease now better known as Tuberculosis.) The first of her two novels Agnes Grey is an insightful look at privilege and the precarious position that unmarried educated women found often themselves in during the nineteenth century. The only respectable career path available is that as a governess. But as the title character Agnes soon discovers, it is not a position that leads to respect, let along personal fulfilment.

Agnes Grey has come from a respectable family who has lost most of their income through an unfortunate event. With her father ill, she has little choice but to leave the family who has loved and sheltered her and go out into the world and take a position as a governess. With the first family, she ill prepared for the badly behaved children in her care and the flippant and often cruel attitudes of their parents. At her second post, she does a little better, overseeing the lives of a pair of privileged teenage girls who are portrayed as having very little in the way of empathy, often treating the people they consider to be inferior to themselves cruelly. And this includes an attempt at sabotaging a developing romance between Agnes and the curate, who is a most suitable match for her. Things come right in the end, though the final chapter feels a little abrupt.

Overall, this is a well told story that shares some similarities with her sister's most famous novel Jane Eyre. The novel is relatively short and a little clumsy in places but the author's insight into human nature more than makes up for its shortcomings.